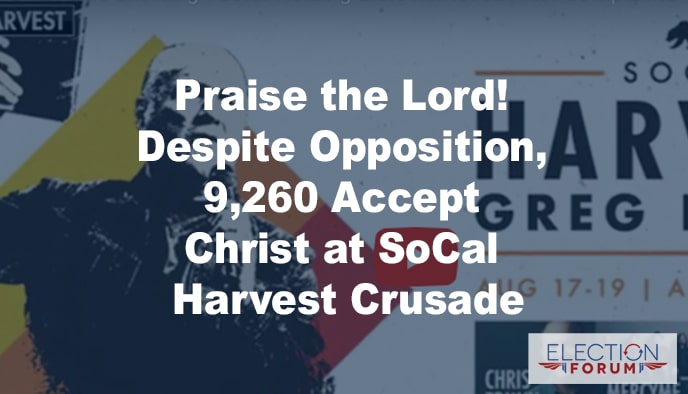 The Greg Laurie SoCal Harvest Crusade was a great success.

Over 100,000 people attended the 3-day event at Angel Stadium in Anaheim, California.

Adding to that the online viewership … and 325,000 people heard Greg Laurie’s gospel messages…

And over 10,000 people accepted Christ as their personal savior when those who watched online and made decisions are added to the 9,260 who made decisions for Christ at Angel Stadium.

Because of the banning of the billboards advertising the Harvest Crusade from the mall in Orange County, Greg made the Bible a major theme of this year’s event.

At the beginning of his first night’s message, Greg got up on the podium … held up his Bible in his “billboard image pose” … and said, “This is the book!”

He noted that the controversy over the billboards – and their removal from the mall – created a nationwide news story that caused more people to talk about the Bible than ever would have talked about it had there been no opposition.

“The fact that people say the image of the Bible is offensive speaks to the power of the Bible,” Laurie said.

He spoke of that power throughout his message that first night…

“Millions of people will attest to the fact that the Scripture has changed their lives. These words have brought hope to the hopeless, perspective to the hurting, comfort to the bereaved. These words found in the Bible have healed marriages, they have cured the addicted, but why are these words so powerful?”

They are powerful, Laurie said, because “these are the very words of God.”

He said the reason most people don’t read the Bible is because they don’t make it a priority.

He asked, “What if we treated our Bible like we treat our cell phone?

And, “What if you had your face in the Book as much as you look at Facebook? ‘Cause you’ll find answers here.”

“Listen, God does not own an iPhone, but He’s my favorite contact. God is not on Facebook, but He is my best friend. God doesn’t use Twitter, but I follow Him. God is not connected to the internet, but I am connected to Him, and His customer service is out of this world. He’s online 24 hours a day. He takes every call, and He never puts me on hold.”

And Greg Laurie presented the gospel with clarity and power.

He summarized the message of the Bible using John 3:16 … “For God so loved the world that He gave His only begotten Son, that whosoever believes in Him should not perish, but have everlasting life.”

He even addressed the issue of abortion … telling the audience that it’s never the right decision to make.

To illustrate, he talked about his new friend John … who was conceived during a date rape.

John’s mother eventually married the man who had date-raped her … but he abandoned her before John was born.

John’s mother admitted to him after he became an adult that had abortion been legal at the time she was abandoned by her husband while pregnant with him, she would have aborted him.

Had John Cox been aborted, there wouldn’t be a Republican candidate – and a Christian – on the ballot running for Governor in the state of California in this year’s midterm election.

So many people are motivated as they see people accepting Christ…

And I love the extensive follow-up campaign for those who do accept Christ.

Greg’s intention is to take Harvest Crusade throughout the United States.

The messages are each 35-45 minutes. The remaining video time is the extended invitation for those wanting to receive Christ. The special music isn’t included in the videos due to contract limitations.

2 Comments on “Praise the Lord! Despite Opposition, 9,260 Accept Christ at SoCal Harvest Crusade”