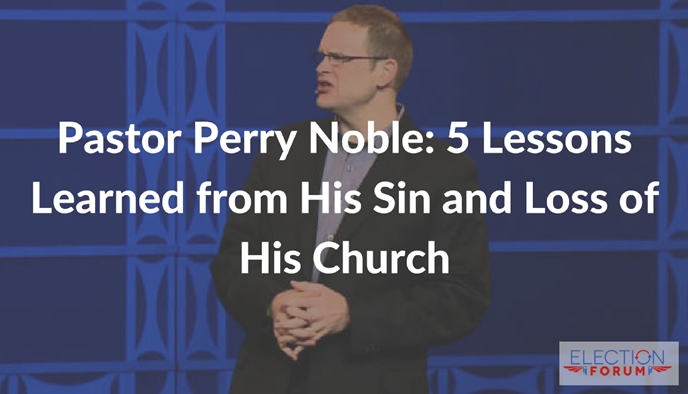 He was the Lead Pastor of New Spring Church in South Carolina, which is one of the fastest growing and largest churches in America.

His books, sermons, and ministry have been used by God to save thousands and minister to hundreds of thousands.

But he had a secret sin—alcohol addiction. And now he has lost his church.

Here are five things he learned from his fall:

“There is no condemnation in Christ Jesus.” (Romans 8:1)

Amazing Grace” is more than a sweet song. It’s the Gospel. Jesus knows everything that we have done and our doing now, but He loves us anyway and blesses us, too.

He also gives us the grace to live free from sin!

“And lets us consider how we may spur one another on toward love and good deeds, not giving up meeting together, as some are in the habit of doing, but encouraging one another—and all the more as you see the day approaching.” (Hebrews 10:24-25)

Perry Noble believed a lie. He thought that he would face judgment and condemnation if he stepped forth and said something to an elder or another member of the church.

He had hoped that just saying nothing and staying quiet, everything would just work itself out.

It didn’t. He needed to reach out for help as soon as he could, and realize that no matter how small an issue, it’s worth telling someone about the struggles that you face.

“One who has unreliable friends soon comes to ruin,

But there is a friend who sticks closer than a brother.” (Proverbs 18:24)

Pastor Perry found that there were people whom he hardly knew in the church who have now become his greatest support and good friends.

Then there were those who stood very close to him during his ministry at the church, and now they don’t talk to him, or they are even hostile and angry. Through it all, Perry has not taken it hard.

For though the righteous fall seven times, they rise again … (Proverbs 24:16)

God is not shocked by our failures, and He does not reject us when we fall. Where sin increases, God’s grace superabounds … and them some! (Romans 5:20)

Consider the examples of these New Testament believers, who fell … forward!

Do not feel like a victim, and do not think for one second that your life is over. God’s plans for your life will always succeed—even if the pathway is zig-zag instead of a straight line.

2 Comments on “Pastor Perry Noble: 5 Lessons Learned from His Sin and Loss of His Church”