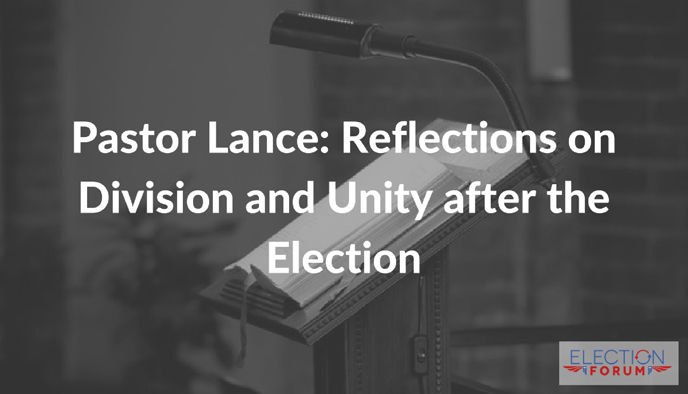 I love the fellowship at CCLH.

I have done many Sunday morning sermons and Election Forum talks there.

I really like their fellowship and their hunger to know God’s Word.

But because this election was so polarizing … because it continues with the liberal media, schools, and politicians stirring up strife, his message is one of peace and truth.

As Christians, our political convictions should never keep us from having or displaying God’s heart towards people, no matter what political views they may have.

As we read through the Bible, we clearly see that Jesus loves & died for everyone, that includes every American. Healing the Divide (Credit: We Why Suffer)

As Christians living in America we support our constitution, but we also support God’s Word, that is the supreme standard by which we live our life.

The Bible reveals that God ordained and endorses human government:

We are to be subject to the governing authorities & there is no authority except from God, and the authorities that exist are appointed by God. (Rom.13:1)

This means that we need to see our government (no matter what party is in office) as a government that is under the sovereignty of God.

As Christians, we have the higher calling as His ambassadors. We are part of The King’s cabinet.

As a church, we don’t simply open our doors to every political group in our community. We open our hearts.

As we gather, we do so as undeserving equals, ever in need of God’s Grace.

All of our political differences should melt in the shadow of His Presence. That’s because his transforming power of the Gospel is the great equalizer, as Paul explained:

As a pastor, I realize that my calling is not politically given nor is it politically driven.  My calling is from Heaven, and with that calling I have been given a mandate to introduce people to The King. To teach them His Word, so that they can go out to the public square & represent His Word by the way they live their lives, by the decisions they make & by the votes that they cast.  It was great to hear that the Evangelical vote was up from 2012.  But that is only one part of our God given responsibilities.

Now we have the responsibility to keep our leaders and our nation in prayer.

Therefore I exhort first of all that supplications, prayers, intercessions, and giving of thanks be made for all men, 2 for kings and all who are in authority, that we may lead a quiet and peaceable life in all godliness and reverence. 3 For this is good and acceptable in the sight of God our Savior.  (1Timothy 2:1-3)