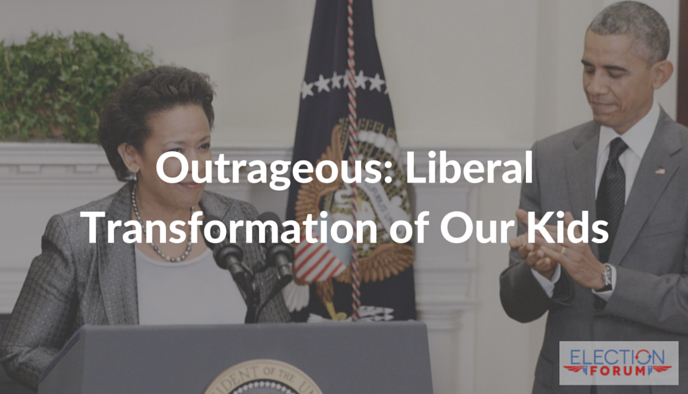 The Church: Standing up to or Giving in to the Secular Agenda? (Credit: CNSnews.com)

Historic … and sweeping change in our society as Obama and his attorney general Loretta Lynch want to force every government school in America to abide by their moral and ethical standards.

They claim that their new public school transgender bathroom policy will ensure that every student is comfortable at school. But only 0.3% of the population identifies as transgender. What about the vast majority of students who will be affected by this disturbing policy? What about the civil rights of other students? Won’t single us bathrooms and stalls suffice?

The federal government is imposing its will (again) by executive fiat, bypassing parents, school boards, or our constitutional government of checks and balances.

If you are a Christian, Obama defines you as a bigot.

About Obama’s perverse bathroom and shower dictates, here are five things that you need to know about the President’s latest executive overreach.

What should Christians do in the face of this progressive/secular onslaught?

We are called to obey the governing authorities over us (1 Peter 2: 17), but more importantly our allegiance is to God.

When the religious authorities told the Apostle Peter not to preach in Jesus’ name, he answered:

“Then Peter and the other apostles answered and said, We ought to obey God rather than men.” (Acts 5: 29)

If we suffer for obeying Him, we should rejoice, not retreat (Acts 5: 41), be salt and light in a dark world, to stand up to the forces of darkness by speaking the truth in love.

9 Comments on “Outrageous: Liberal Transformation of Our Kids”