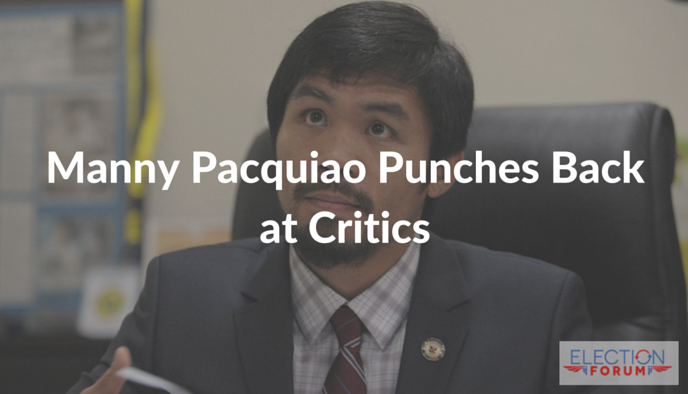 And now a culture critic facing a backlash as he attacked homosexuality as unnatural. He then shared that marriage is for only one man and one woman.

Pro-homosexual groups condemned his remarks, and later the boxer apologized.

One of his corporate sponsors, Nike, dropped him after his remarks, citing their opposition to every form of discrimination. Pacquiao, a growing heavyweight in Filipino politics, learned the hard way how fast social media can spread one’s message on anything.

Still, he respects Nike’s decision to end their relationship.

But he does not apologize for standing up for Biblical truth.

The Filipino legislator, who is now running for a senate seat (and may run for President) affirmed that it is more important for people “to hear the truth.”

“I still stand on my belief that I’m against same-sex marriage because of what the Bible says, but I’m not condemning LGBT. I love you all with the love of the Lord.”

One Comment on “Manny Pacquiao Punches Back at Critics”