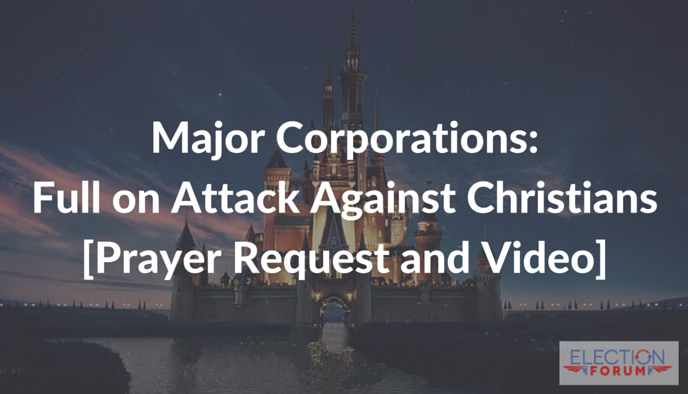 Christians are under attack by Disney and other major corporations.

Now they are targeting a particular state.

Georgia wants to pass its own version of the Religious Freedom and Restoration Act, HB 757, to enshrine individual freedom of speech and religion.

Specifically, the bill would protect churches, charities, and small business from participating in activities which violate their conscience. Pastors would exercise their right not to officiate same-sex weddings. Individual businesses would be protected from participating in certain activities, like baking a wedding cake for a same-sex wedding, if such an action goes against their religious principles.

Major companies—including Coke, UPS, and MailChimp, are pressuring the governor to veto the legislation.

The National Football League later piled on, and issued the following statement:

“NFL policies emphasize tolerance and inclusiveness, and prohibit discrimination based on age, gender, race, religious, sexual orientation, or any other improper standard.”

The NFL then threated to bar future Super Bowl events from Georgia if the state enacted the legislation. Movie studios have also threatened to take their productions to other states.

Governor Nathan Deal has to weigh the consequences of these economic boycotts. Will these threats hurt the Peach State’s economy? Some business owners and faith-based groups welcome the law, while others are prepared to leave the state.

And what prompted the corporations to act? The progressive left marketing machine—petitions, emails, tweets, and social media, all targeting the top corporations to buck their course.

But Christians are fighting back.

Evangelist Franklin Graham is encouraging Georgia’s governor to stand up to the corporations and their left-wing bullies. Graham pushed past all the noise of the progressive agitators: “This bill does not legalize discrimination, but contain discrimination against Christians who simply want to live out their faith.”

He has contacted Christians throughout the country to push back against the onslaught by direct mail, phones, or email!

Learn more about this controversy.

Should the Governor sign the bill affirming religious liberty, or veto it, regardless of the perceived threats to the state’s economy? Email me your thoughts at craig@electionforum.org.

Could you help us stop this insanity?

Office of the Governor

2 Comments on “Major Corporations: Full on Attack Against Christians [Prayer Request and Video]”