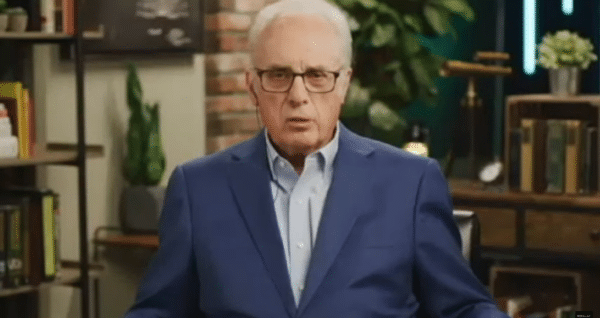 A judicial activist told Dr. John MacArthur of Grace Community Church in California to shut down his church services.

Here are 8 shocking things you should know:

But in California and a few other states, the government refuses to let that happen.

The California pastor defied Governor Newsom and local officials, and opened his church.

Shocker #2: The Judge who denied Grace Community’s constitutional right to hold church is a judicial activist — and biased against the church.

The judge, Mitchell Beckloff, is a Democrat with animosity towards Christians.

Being married to another man, Beckloff had to know about MacArthur’s stand on homosexuality.

Beckloff is a pro-socialist judge who has contributed to Hillary Clinton.

Beckloff’s 18-page ruling ignored his previous agreement with Superior Court Judge Chalfant who held that MacArthur could open his church. Beckloff ignored the constitutional issues and simply agreed with the government decision to close down the church.

He ordered that there be no in-house service, demanded the church follow a list of some 20 impossible-to-follow orders, and required county health officials to the church to post notes of his order and to send government agents to verify compliance.

The judge should have disqualified himself … and voters should defeat him in his next election.

Shocker #3: There have been organized attacks on MacArthur and the church.

The judge may have been swayed by the organized hatred against MacArthur, including by activists. For example, there was a campaign to call the police about the church services.

Shocker #4: The attack on the church is part of the bigger attack on Christianity.

The lockdown has turned political. Now the effort is to:

Shocker #5: Pastor John MacArthur points out the ruling made no sense.

MacArthur said, “In an inexplicable ruling, the judge said the scale tipped in favor of the county. One one-hundredth of 1% of Californians with a virus apparently wins over the US. Constitution and religious freedom for all? That is not what our Founders said. Nor is that what God says, who gave us our rights that our government — including the judicial branch — is supposed to protect. The scale should always tip in favor of liberty, especially for churches.”

Shocker #6: The flawed ruling will be appealed.

“The court also did not properly consider the medical and scientific evidence that the current number of people with serious COVID-19 symptoms no longer justifies a shuttering of the churches. Nor do we believe that the court gave adequate consideration to the fact that churches have been treated as second-class citizens compared to the tens of thousands of protestors. More than ever, California’s churches are essential.”

“Church is essential, and no government agent has the runaway, unlimited power to force churches to close indefinitely. The county’s argument was basically ‘because we can,’ which is the very definition of tyranny. Without limiting government’s power in favor of freedom and protected rights, we have no liberty. We will fight for religious freedom as our Founders did when they wrote the First Amendment.”

Shocker #7: The hospitalizations and deaths from the virus do not justify the closure and government overreach.

California has the toughest pandemic restrictions in the nation, according to a WalletHub analysis. This is despite the fact new COVID-19 cases have dropped 34% and deaths have fallen by 23% in the last two weeks.

The California Department of Public Health has recorded 742,865 cases and 13,978 fatalities since the start of the pandemic.

That’s 13,978 out of 40 million Californians. And over 8,000 of these are people over 70 with cancer, heart problems, and other deadly health issues.

Shocker #8: Pastor MacArthur pleads for your church to help.

Too many churches in California and a dozen lockdown states still have failed to open inside worship services.

Churches in other states are fully open.

Those in the lockdown states not holding inside services are hurting their fellowship … and are hindering other churches from opening.

It hurts their church. It hurts ministry. It’s not right.

Pastor John MacArthur has asked for pastors in California to open their church services, making it impossible for coercive government regulation to continue the tyranny against Christians.