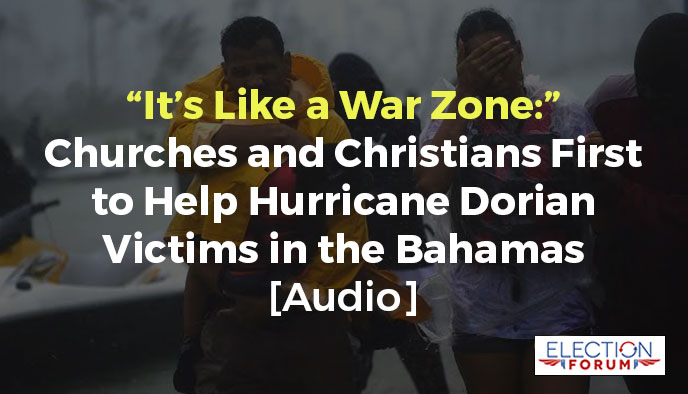 And it was Christians who were among the first to help the victims.

It created a storm surge of 24 feet … on islands that are scarcely more than that in elevation.

I’ve been communicating with Pastor Clint Watson … and watching Pastor Neil Ellis and others in the Bahamas.

Duane Sands – minister of health in the Bahamas – summed up the destruction: “The level of damage is so intense that it’s almost difficult to conceptualize what force or convergence of forces could have led to the shattering, the splintering of buildings of stone, of concrete and wood.”

As of this writing, 50 people have lost their lives … approximately 76,000 are homeless … and hundreds are still missing.

The day after Dorian moved away from the Bahamas, Samaritan’s Purse – a nondenominational, evangelical Christian disaster relief organization – sent a team of more than 60 staff members to help the Bahamian government and the World Health Organization with relief efforts.

They flew in 30 tons of relief supplies on a DC-8 cargo plane and began setting up an emergency 40-bed field hospital – equipped with an operating room, an obstetrics ward with a delivery room – and they flew in a team of medical specialists … including doctors and nurses.

Because there are only a few vehicles on the islands that didn’t sustain damage from being submerged in water for 2 days, Samaritan’s Purse is using a small airplane and a helicopter to transport team members and supplies to hard-to-reach areas.

Convoy of Hope – another faith-based humanitarian-relief organization based in Springfield, Missouri – has also delivered thousands of pounds of relief supplies to the islands via chartered planes.

Pastor Ted Traylor of Olive Baptist Church in Pensacola, Florida, networks other Baptist churches in the area to respond to natural disasters with relief efforts…

“We network our churches together whenever the need comes up and then we are there with feeding units, cutting trees, mudding out houses – whatever the need is,” Traylor said.

Meanwhile, 57 search-and-rescue specialists who work for the U.S. Agency for International Development (USAID) after disasters occur around the world arrived 2 days after the Samaritan’s Purse team.

The USAID workers have done little to help the survivors of Dorian – instead attending meetings with government officials and posing for photographs with the Christian relief groups who are actually working on behalf of the survivors.

Mark Green, the administrator of USAID, took an aerial tour of the disaster areas in a U.S. Navy airplane – a week after the storm struck…

The $2.8 million in aid that the U.S. has provided for the Bahamas is enough to help a little more than half of the people left homeless by Dorian.

They have sent one plane load of 1.5 tons of relief supplies to the Bahamas – while using the disaster as an opportunity to plead for more donations.

The UN efforts – including UNICEF – are a rip-off and are immoral. Don’t support this waste of money.

The takeaway from all of this: Christians and Christian organizations are far more generous … far more efficient … and far more timely in responding to natural disasters than governments, government agencies and government bureaucrats.

One other note: remember when hurricanes, floods, earthquakes, volcanic eruptions and other natural disasters were called “acts of God?”

The socialists and the progressives now blame these events on global warming – global warming caused by MAN … which is unproven. And the global warming hypothesis doesn’t account for all the massive hurricanes, tornados and other natural disasters over the past 200 years.

When man decides to become his own god, then it follows that man is the cause of all severe weather events … and more.

It’s a distortion of reality.

Action Items — What you can do to help: