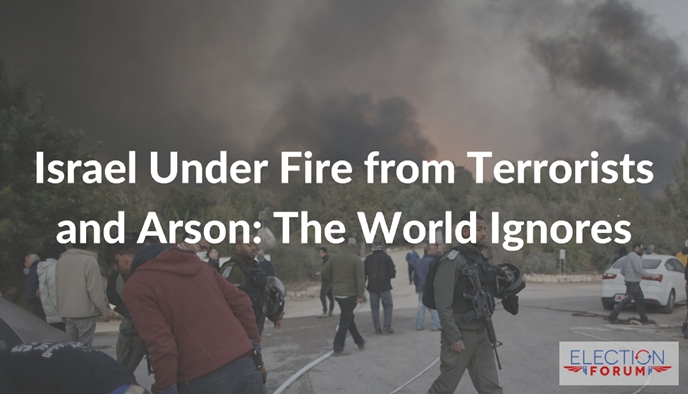 One of the United States’ strongest allies.

This country is under attack constantly.

Instead of supporting the Jewish State, the United Nations security council wants to force Israel into more concessions for peace.

That is wrong. There can be no peace when one side of a conflict wants the other side dead.

Palestinians have lately launched over 300 attacks against Israel, including knife attacks that kill women and children.

The latest threat that has swarmed this little country, the size of New Jersey: pyro-terrorism.

Hundreds of wildfires have raged all around the nation. Israeli police have identified suspects with gasoline-soaked rags spreading the arson. 23 suspects have been arrested in connection with these fires.

In the United States, major news reporting have ignored these pyro-terrorist attacks. This is wrong. What happens to Israel is very important for all of us. The security of the only stable democracy in the region is crucial to lasting peace throughout the Middle East.

There is more good news for Israel following his election to the Presidency:

Behold, I will gather them out of all countries, whither I have driven them in mine anger, and in my fury, and in great wrath; and I will bring them again unto this place, and I will cause them to dwell safely:” (Jeremiah 32:37)

4 Comments on “Israel Under Fire from Terrorists and Arson: The World Ignores”