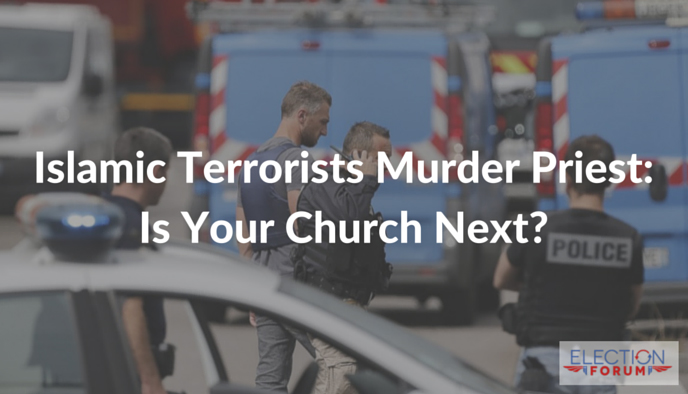 Terror and persecution is coming to the churches in the United States.

A glimpse of this just happened when terrorists killed a priest in France.

Two more jihadis, connected to ISIS, took over the Church of the Gambetta in Normandy, France during its morning mass.

The terrorists forced Father Jacques, an elderly priest yet still very active in his community, on his knees in front of the church with the video recording. When Father Jacques tried to defend himself, the terrorists slit the priest’s throat.

They intended to decapitate him.

Beheading is the common practice among Islamic radicals, taught in numerous verses of the Koran:

5:33–The punishment of those who wage war against Allah and His Messenger, and strive with might and main for mischief through the land is: execution (by beheading).

8:12–I will instill terror into the hearts of the unbelievers: smite ye above their necks.

47:4–Therefore, when ye meet the Unbelievers (in fight), strike off their heads;

Since 2015 in France, Islamic terrorists have targeted publications (Charlie Hebdo) and the public (Paris, Nice). 130 were killed in November 2015, and then 80 more in Nice last month.

Islamic militants have been targeting Christians, particularly ministers and religious leaders in many countries.

One tweet from an ISIS supporter signaled the motive as well as the means of the Islamic caliphate:

“The security you lived in has gone forever, you Crusaders. Today there is no voice louder than the voice of the Caliphate, thank God.”

This is war, a Holy war, a clash of civilizations, and yet in the West, elected leaders are either not fighting hard enough, or refuse to call this evil by its name: Islamic terror.

That church in France went from a House of Peace and Love to a Warzone of Blood and Terror.

Terrorist attacks around the world (Credit: Visions of Humanity)

Is your church next?

Our brothers and sisters in Christ have experienced this persecution in many parts of the world.

Churches burned, pastors killed, houses of worth up blow up with people in them, even set on fire.

We are seeing a rising attack on Christians and the church in Nigeria, Syria, Congo, Sudan, India, Indonesia, dozens and dozens of countries.

They don’t get the press.

And the Church is basically silent about the merits and victims of the enemies of Christ.

For a number of years, I’ve warned about the potential of a terrorist attack at an American church.

I still believe a matter of time we will see that as well as an escalation of worldwide attacks.

Is your church prepared? Is it taking the necessary precautions?

As followers of Christ, we do not live in fear, the love of Christ gives us the basis for joy, peace, and hope.

But the Lord asks that we be as wise as serpents (Matthew 10:16)

The killing in the black church in South Carolina by a mentally ill racist, of people gathered for bible study and prayer shocked the nation.

These type of events should lead us to pray that God:

Indeed, there is a cost for standing for Christ.

But we must be prudent, and protect ourselves, have a plan to ability to spot and prevent these type of acts.

If you have any other comments, email me at craig@electionforum.org

7 Comments on “Islamic Terrorists Murder Priest: Is Your Church Next?”