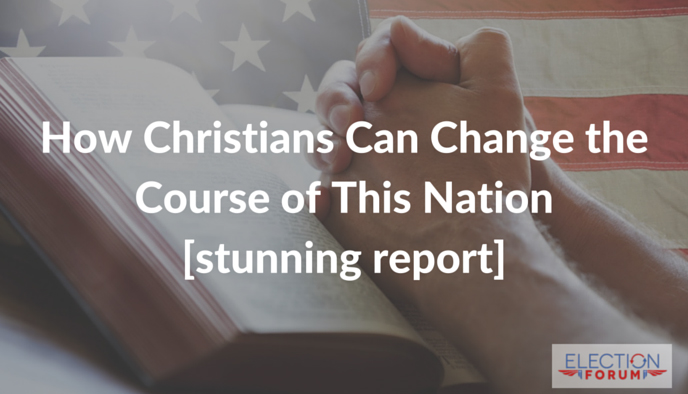 Half of the Christians at evangelical churches are not registered to vote.

Half of those who are registered do not vote.

Despite this, 27% of the total vote in presidential elections are from evangelicals.

Most Christians don’t vote… but something huge… and different… happened in Houston, Texas.

What happened in the Houston election upset (see “A Huge Victory for Religious Liberty”) points to what could happen in your city, in your state, and nationally – if pastors activate your church.

The left and the media are in shock that the anti-Christian freedom initiative in Houston was defeated by 23 points.

Millions of dollars were poured in nationally to defeat the Christians… and common sense.

Some of the best campaign organizers in the social media world, TV world, radio, and political strategy wanted to crush the conservative and Christian vote. And they failed.

In cities and states across the nation, the advanced marketing strategies and tactics that helped deliver President Obama and many progressive liberal Democrats a victory over the years, have wiped out conservative and Christian efforts.

Conservatives and Christians… and their often Republican allies… act as if marketing were from the 1990’s. They just have not been able to pick up the modern marketing techniques of the progressive left. The progressive left has used this as an advantage to defeat their opponents by merging the marketing and advertising and getting out the vote.

In Houston – overwhelmed by media pressure, overwhelmed by the left’s threats, sports teams and companies like Apple talking about boycotting Houston and throwing their support with the proposition – they thought they would win.

More than 30,000 door to door visits and more than 100,000 volunteer phone calls were initiated because of pastor support.

In America today, too many pastors are allowing our culture, political system, and economic system become enslaved by progressive ideology because they’re silent. And the few who speak out still do not do what’s necessary to mobilize their fellowship to register and get out the vote.

The church should never be a political organization.

But in the face of the immoral policies that are destroying religious liberty, that promote a culture of killing babies, that are undermining Israel, and that are creating economic havoc, it’s time for pastors to stand up. It’s time for them to encourage their fellowship to take a stand. We saw this in the American revolution. We saw this with pastors opposing slavery. Now we need to see it to bring about much-needed changes and stop the erosion of our freedoms.

Have you talked to your pastor? Is your pastor willing to take a stand? Please let me know.

Note: Like to help us make changes? See how you can help here.