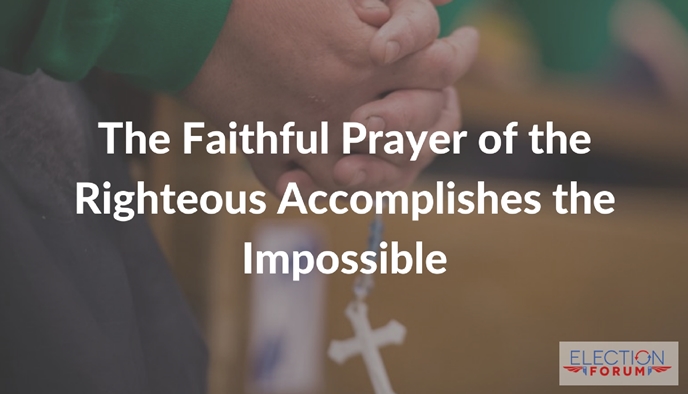 The 2016 Election saw the improbable happen …. Donald Trump not only won the election, when most thought that he didn’t have a chance against Hillary Clinton.

And for good reason.

Hillary outspent the Donald $1,191M to $646.8M. Trump had a lack of organization, the polls were against him, and the media was terribly biased against him.

The biggest reason why? The Evangelical vote.

Evangelicals went out and voted in larger numbers this time.

It increased 1% for Trump and went down 3% for the Democratic candidate. Trump received 3 million more votes than Romney:

80% of Evangelicals voted for Donald Trump, a higher percentage than voted for George W. Bush in 2004.

“The effective, fervent prayer of a righteous man avails much.” (James 5:16)

Donald Trump would not have been elected, if not for the Evangelical vote. And most observers thought he could never get it:

But no one saw the prayer.

Evangelical groups, churches, and more were praying for God’s mercy, intercession, and will to be done in this country:

“If my people, who are called by my name, will humble themselves and pray and seek my face and turn from their wicked ways, then I will hear from heaven, and I will forgive their sin and will heal their land.” (2 Chronicles 7:14)

And the results? The Impossible!

“But Jesus beheld them, and said unto them, With men this is impossible; but with God all things are possible.” (Matthew 19:26)