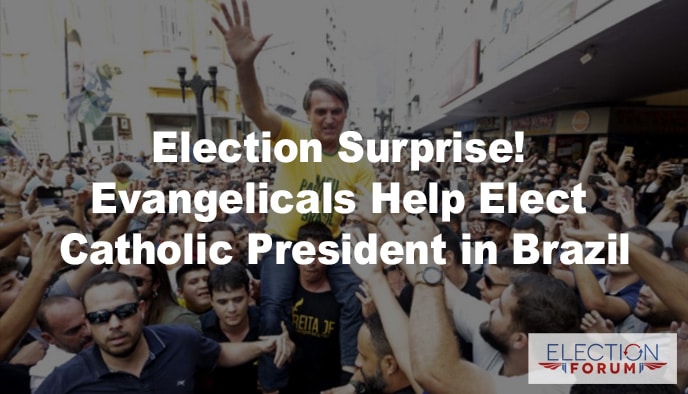 The many frustrations with the government energized voters for the recent presidential election – especially evangelicals, who make up 20% of the total population of 210 million.

One pastor said, “The left went too far… Indoctrinating school children on sex revolted many parents.”

His first words when he began his victory speech to his supporters: “I first want to thank God.”

His popularity skyrocketed during the campaign when he promised to:

He also promised to move the Brazil’s Israeli embassy from Tel-Aviv to Jerusalem.

President Trump called to congratulate Bolsonaro on his victory … and later tweeted, “…We agreed that Brazil and the United States will work closely together on Trade, Military and everything else!…”

During the election campaign, evangelicals organized grassroots efforts to distribute flyers and to promote Bolsonaro’s qualifications to those in their social circles.

One Brazilian political observer noted that the evangelicals are more adept at organizing politically than the Catholics.

He told the Associated Press, “The evangelical vote is very organic in that pastors and bishops have a relationship with followers that influence how they vote. It’s the opposite in the Catholic Church, where, despite having more congregants, priests have less direct influence.”

Perhaps evangelical pastors and voters in the U.S. could learn some things from Brazil’s evangelicals…