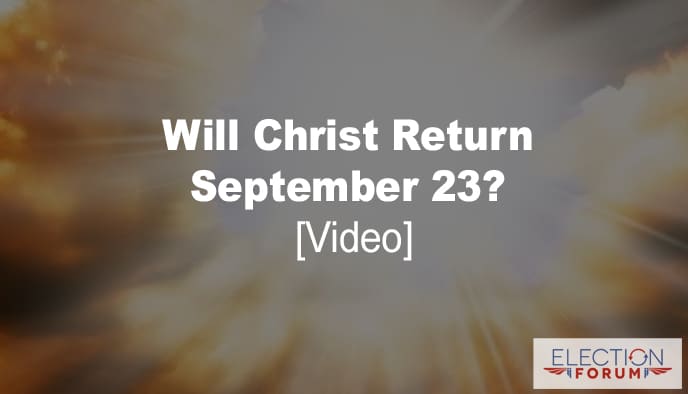 Over 3 million people have watched a video on end-time prophecy … alluding to Christ’s return on September 23.

Is the end of the world coming in a few days?

Is the Rapture coming on September 23?

Is something big coming at that time?

Or is nothing going to happen?

As history has shown, it’s probably the latter.

A group called “Unsealed” has produced a video on this astronomical event that has been seen more than 3 million times as of this writing.

The video is titled September 23, 2017: You Need To See This (Date Setting A Sign, NOT The Rapture).

It begins with Revelation 12’s depiction of “a woman clothed with the sun, with the moon under her feet, and on her head a crown of twelve stars.”. She is pregnant and gives birth to “a male child, one who is to rule all the nations with a rod of iron.”

The film claims that “the woman is the constellation Virgo” while “the male child is Jupiter,” which “represents Christ and His Church.”

As the video depicts Jupiter moving out of Virgo (signifying the “birth” of the “male child”), lights flash across the sky. Clothes are left behind by people who have apparently been “raptured.”

The video ends with the words, “No one knows with certainty the day or hour, but faithful servants are watchful.”

Jesus told us: “Concerning that day and hour no one knows, not even the angels of heaven, nor the Son, but the Father only” (Matthew 24:36).

But some love trying to guess the exact end of times.

And they are then proven wrong.

The media has been reporting on this … and the mocking on September 24th will be non-stop.

Those who believe this will be crushed … some will come away with hardened hearts and skepticism based on man, not the Word.

When Sunday comes along and we are all here to go about our normal lives, evangelical Christians will be mocked once more.

Even Jesus doesn’t know when He will return for His church, so why are people so preoccupied to pinpoint a specific time and date?

We know, based on God’s Word, that:

So, never mind the predictions.

You just need to be ready.

There is only ONE QUESTION you need to ask yourself, and it’s this:

“Am I ready if Jesus comes back while I am reading this story.”

Watch the 4-minute video and see what you think.