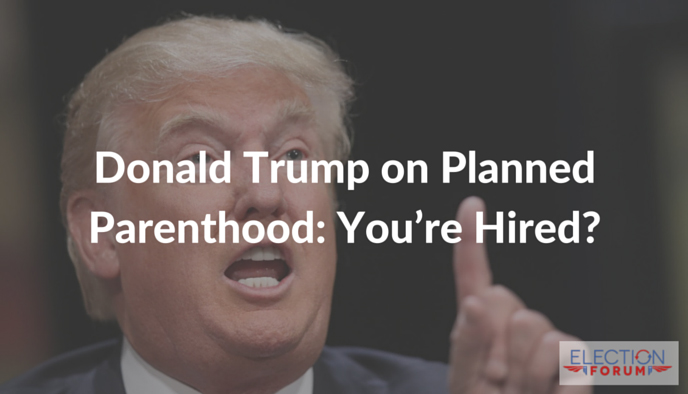 It’s not the responsibility of the federal government. And it’s immoral to force those opposed to abortion to pay for it directly or indirectly.

Many Reality Alert readers have been confused by the back and forth between Ted Cruz and Donald Trump.

Recent undercover videos exposed Planned Parenthood operatives selling the body parts of aborted babies. Gianna Jessen, who survived an abortion, testified to Congress how abortionists today will kill children rather than allow them to live, even if they survive an abortion.

She also called on Congress to consider that they will stand before God and give an account for allowing the murder of 50 million babies—a practice which Planned Parenthood has not only continued and condoned, but even profited from. Following the release of a series of undercover videos, clearly

And yet Donald Trump is still willing to support Planned Parenthood if they stop abortion.

“Look, Planned Parenthood has done very good work for many, many — for millions of women … There’s two Planned Parenthoods … You have it as an abortion clinic. Now that’s actually a fairly small part of what they do, but it’s a brutal part. And I’m totally against it, and I wouldn’t do that. They also, however, service women …”

Yet Donald still claims that he is pro-life despite his support for the institution.

Is the abortion part really a small amount of what Planned Parenthood does?

Planned Parenthood spokeswoman Cecile Richards acknowledged in House Oversight Committee hearings that in fact 86% of funding goes toward abortions! This heinous use and abuse of funding brings up another fundamental question: What role does the federal government play in these institutions in the first place?

So which is? Will a President Trump say “You’re Hired!” or “You’re Fired!” to Planned Parenthood?