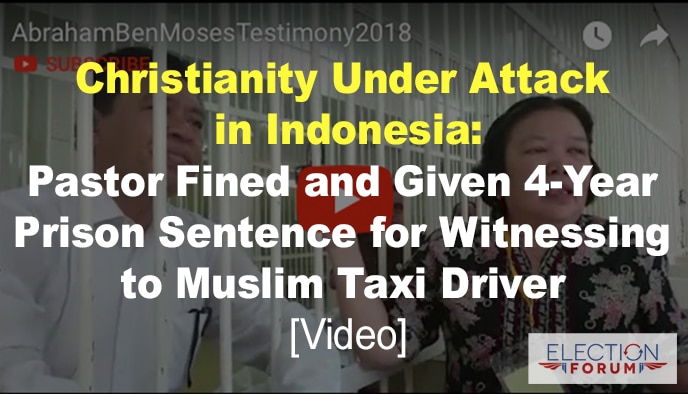 But don’t mention that in Jakarta or other parts of West Java … where radical Muslim groups are powerful … and are able to exert strong pressure on politics and social institutions.

Three churches – an Evangelical, a Protestant and a Catholic – were recently bombed on one Sunday, killing fellow believers in all three locations.

For example, an Indonesian district court in Tangerang – a western suburb of Jakarta – recently sentenced a Christian pastor to 4 years in prison and fined him $3,565 for sharing his faith with a taxi driver.

Ben Moses was arrested after a video was widely circulated showing him sharing his faith with a Muslim taxi driver … and talking about Islamic teachings on marriage.

One of Indonesia’s largest Islamic organizations filed a blasphemy complaint against Ben Moses based on the video.

He was then convicted under an Electronic and Information Transactions Law for spreading information intended to “incite hatred on the basis of religion.”

Although 80% of Indonesian citizens are Muslim, Ben Moses plans to appeal his conviction.

Pray for the Christians in Indonesia, as persecution continues to increase.

Watch this video testimony of Abraham Ben Moses from his prison cell (about 2 ½ minutes):