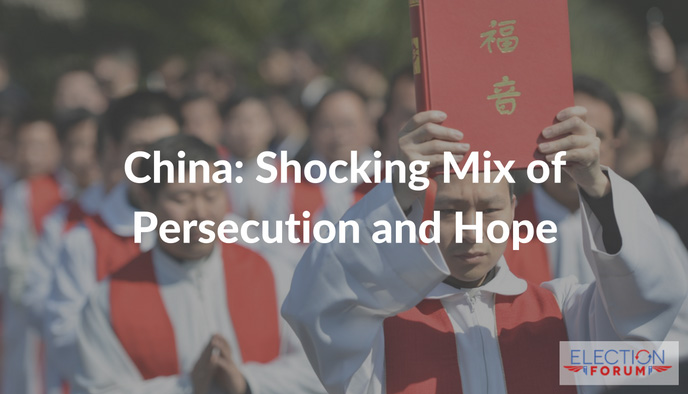 This nation has a ruthless, abusive government.

Public declarations of faith must be approved by the state. If anyone interferes with what the government bureaucrats want

Any deviation from the government’s one-party political orthodoxy is punishable by fines, imprisonment, torture, and even death!

And yet … belief in Jesus and the flourishing of Christianity is exploding in China, and will make this nation the most Christian country in the world.

Missionaries have been sharing the Gospel in the Middle Kingdom for the last two hundred years.

But the conquest of the Communist Party in China drove the Church underground.

Following Chairman Mao ZeDong’s Cultural Revolution of the late 1960’s and the Tienanmen Square massacre of 1989—which killed hundreds of millions—the Chinese people are rejecting atheistic Marxist-Leninist Communism and turning to Christ.

Some churches are permitted to practice their faith, but only under strict surveillance. Pastors, missionaries, and home churches are unregistered but proliferate, and face intense persecution.

Yet even in the midst of such oppression, the Gospel is preached, and more Chinese are being saved!

Meditate on these two verses for more revelation about how God’s grace overcomes the hatred of man.

When Paul was imprisoned for Christ’s sakes, he revealed how it was working for God’s glory:

“But I would ye should understand, brethren, that the things which happened unto me have fallen out rather unto the furtherance of the gospel; 13So that my bonds in Christ are manifest in all the palace, and in all other places;” (Philippians 1: 12-13)

“And he said unto me, My grace is sufficient for thee: for my strength is made perfect in weakness. Most gladly therefore will I rather glory in my infirmities, that the power of Christ may rest upon me. 10Therefore I take pleasure in infirmities, in reproaches, in necessities, in persecutions, in distresses for Christ’s sake: for when I am weak, then am I strong.” (2 Corinthians 12: 9-10)

One Comment on “China: Shocking Mix of Persecution and Hope”