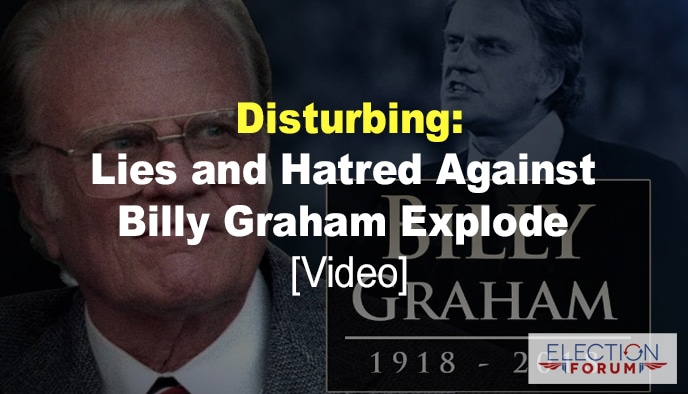 Christians rejoiced at the life, legacy and homegoing of Billy Graham …

But the media and social media have been spreading lies and hate.

“The big news today is that Billy Graham was still alive this whole time. Anyway, have fun in hell, b- -ch.”

Even more disturbing than the tweet itself is the fact that it received over 8,000 likes … and that it was retweeted nearly 1,000 times.

When she was criticized for not respecting the dead, Duca followed up with,

“’Respecting the dead’ only applies to people who weren’t evil pieces of s- -t while they were living, thanks.”

Graham is hated by radical liberals and progressives … who accuse him of being:

None of this is true … He was a champion of integration in the 1960s.

He treated everyone with love and respect … and he was one of Israel’s greatest supporters and advocates.

But we should not be surprised by the vitriol spewed by those who reject God and His moral absolutes … After all, Jesus said to His disciples,

It is estimated that Billy Graham preached the gospel of Christ to 215 million people through his more than 400 Crusades, simulcasts and evangelistic rallies in more than 185 countries and territories.

He reached millions more through TV, videos, films, the internet and 34 books.

Tributes of praise for Billy Graham have been pouring in from all over the world. Here are just a few of them:

President Donald Trump: “The GREAT Billy Graham is dead. There was nobody like him! He will be missed by Christians and all religions. A very special man.”

First Lady Melania Trump: “Saddened by the loss of Evangelist Billy Graham. He led an impactful life, touching so many people with his spiritual teachings. He will be deeply missed.”

Vice President Mike Pence: “Billy Graham’s ministry for the gospel of Jesus Christ and his matchless voice changed the lives of millions. We mourn his passing, but I know with absolute certainty that today he heard those words, ‘well done good and faithful servant.’”

Former President George W. Bush: “Billy Graham was a consequential leader. He had a powerful, captivating presence and a keen mind. He was full of kindness and grace. His love for Christ and his gentle soul helped open hearts to the Word, including mine. Laura and I are thankful for the life of Billy Graham, and we send our heartfelt condolences to the Graham family.”

Archbishop of Canterbury Justin Welby: “The debt owed by the global church to him is immeasurable and inexpressible. Personally, I am profoundly grateful to God for the life and ministry of this good and faithful servant of the gospel; by his example he challenged all Christians to imitate how he lived and what he did. He was one who met presidents and preachers, monarchs and musicians, the poor and the rich, the young and the old, face to face. Yet now he is face to face with Jesus Christ, his savior and ours. It is the meeting he has been looking forward to for the whole of his life.”

And Billy Graham himself sent out this notification in advance:

“Someday you will read or hear that Billy Graham is dead. Don’t believe a word of it. I shall be more alive than I am now. I will just have changed my address. I will have gone into the presence of God.” –@BillyGraham

A memorial website has been created containing information about Billy Graham’s life, plus video clips from some of his Crusades

Watch the 7-minute video of Kathie Lee Gifford sharing the gospel with Megyn Kelly and her TODAY audience as she recounts stories of her friendship with Billy Graham: