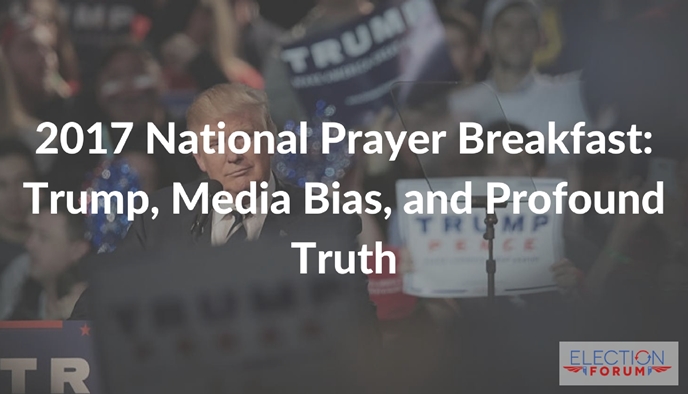 What he said was awesome! What the media reported was disgusting.

Among the distinguished guests who attended, this year’s guests were:

The keynote speech was from Barry Black, the chaplain of the United States Senate. He spoke to the audience about prayer, and how to do it. He cited a specific verse:

In his speech, Trump praised staff and attendees.

He spoke at length about William Ryan Owens, a Navy SEAL who was killed in Yemen.

He also stressed his strong commitment to protect religious liberty and this country’s needs to seek God and ask Him for wisdom.

He pledged to repeal the Johnson Amendment one and for all:

“I will get rid of and totally destroy the Johnson Amendment and allow our representatives of faith to speak freely and without fear of retribution.”

Of course, in their ongoing biased fashion, the media ignored Trump’s frequent appeals and references to God and country, and fell apart over Trump’s little joke. Trump took a quick jab at his Apprentice replacement, movie star and former California Governor Arnold Schwarzenegger. “Let’s pray for his ratings.”

Ronald Reagan at his 1983 prayer meeting once said:

“Of the many influences that have shaped the United States into a distinctive nation and people, none may be said to be more fundamental and enduring than the Bible.

“The Bible and its teachings helped form the basis for the Founding Fathers’ abiding belief in the inalienable rights of the individual, rights which they found implicit in the Bible’s teachings of the inherent worth and dignity of each individual.”

Check out Trump’s full remarks below: