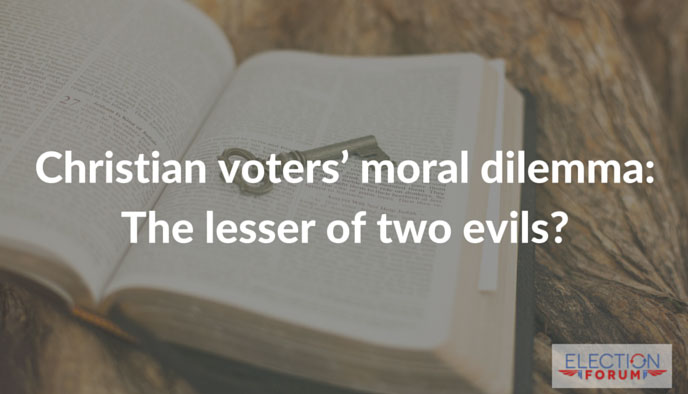 As Christian citizens living and working and sharing our faith in a fallen world, we have a moral obligation to vote in elections and to choose with intelligence and with discretion the candidates for whom we vote.

According to Exodus 18:21, the general character qualities we should be looking for in political candidates are the following:

If there are political candidates who clearly exhibit these qualities, they are the ones we should support.

But often it’s not possible to know, for example, whether a candidate truly reveres and trusts God in his or her daily life, or just believes in the existence of God. (Revering God and believing in God are not the same things.)

Political candidates, in attempting to appeal to a broad spectrum of the voting public, usually speak in generalities rather than specifics.

And then there’s the added complication that the news media and social media only communicate what they want us to hear.

How do we get around the information maze and make discerning and wise voting decisions? I recommend examining whether candidates agree or disagree with us on the social issues that are most important to us, such as:

These are a few of the non-negotiable values and political positions that can help determine our support for a candidate.

Note: The biblical principles regarding each of the above “non-negotiable” issues are covered in separate chapters later in this book.

It’s rare to find a candidate who agrees with all of the non-negotiable issues that are important to Christians. This creates a dilemma.

In searching for a solution, it’s helpful to consider that one of our moral responsibilities as Christians is to avoid evil in our own lives and to seek to limit evil in the lives of our government leaders by taking a stand against it.

“When the righteous increase, the people rejoice, but when a wicked man rules, the people groan … The king

gives stability to the land by justice, but a man who takes bribes overthrows it.” (Proverbs 29:2, 4)

1.  Pray for wisdom and discernment in voting.

“But if any of you lacks wisdom, let him ask of God, who gives to all generously and without reproach, and it will be given.” (James 1:5)

2. Choose candidates who agree with your Christian values.

Vote for your values, not against them.

3. Vote strategically with wisdom and prayer, to limit evil.

Vote in such a way as to prevent dishonesty and evil in the areas of political “back room” deal-making and government policies. Let me explain how strategically limiting evil works.

On rare occasions, there may be a really good candidate who aligns with your Christian worldview on every issue. But most often, you will be faced with choices that are not clear.

Consider a typical example of two candidates running for an elected office. Let’s call them Candidate A and Candidate B.

To complicate matters even more, let’s say there’s a third-party candidate – an Independent Candidate C – who is more completely aligned with your values. But realistically, Candidate C has no chance of winning the election.

As a Christian, you want to vote according to your Christian values and worldview … and honor God with your vote. That is your dilemma.

What do you do? How do you cast your vote?

As Christians, our stances on non-negotiable issues are inflexible. They go beyond politics. They are moral issues that will affect the future of our society as well as determine the type of world in which our children will grow up.

Issues of life, building strong families, traditional marriage and pro-job creation and pro-economic growth are fundamental to our belief system and a healthy society.

Other issues important to Christians may include:

Against that background, there are two ways Christians can view how to vote:

You believe this is the only way to have a clear conscience.

So, if Candidate A supports using government funds – taxpayer money – to pay for abortion, you could never vote for that candidate. But what if that candidate supports parental notification and opposes partial-birth abortion while supporting the use of taxpayer dollars to fund abortion? Your vote would still be “No.”

Now let’s say Candidate B also supports taxpayer-funded abortion, also supports partial-birth abortion and is against parental notification. You would never vote for that candidate either. Instead, you vote for Candidate C who agrees with your Christian values on abortion, but who clearly has no chance of winning.

If Candidate B—who is for taxpayer-supported abortion, for partial-birth abortion, and against parental consent—wins because you, as a Christian, voted for Candidate C who is aligned with your Christian values, that’s OK with you.

Why? Because you believe God doesn’t measure us by who wins or loses, but by our faithfulness to our values without compromise.

This view believes we honor God by not voting for anyone who disagrees with any of our biblical values, and we then allow Him to do the impossible. We are being faithful to what God has called us to do, and we leave the results in His hands.

By voting for a third-party candidate or write-in, you

are saying the lesser of two evils is still evil.

Christian voter #2: This person votes to strategically limit evil as much as is possible. This voter disagrees with voter #1.

In the case of abortion, voting for Candidate A, who is opposed to partial-birth abortion and for parental consent, even if he is in favor of taxpayer-funded abortion, is a way to restrain evil and save lives.

By saving lives, you are strategically limiting evil.

The principle of strategically avoiding the worst evil means that although you are not voting for a candidate who fully agrees with your views, you are choosing the candidate who is best suited to your

values among those candidates who have a legitimate chance of winning the election.

elections. Voting in a primary election sometimes allows you to vote for the “near-perfect candidate” because the field is broad, and you have more candidates to choose from.

Voting for a third-party candidate in a general election

Rahab, the prostitute in the ancient city of Jericho, used this principle to protect Jewish spies. You can read her amazing story in Joshua 2:1-21, and 6:1-25.

Death-camp survivor and best-selling writer, Corrie Ten Boom, tells of the Nazis pounding on her family’s front door and demanding to know if they are hiding Jews. The higher moral ground was to lie to protect life.

It’s not a matter of choosing “the lesser of two evils.” As Christians, we must never choose evil. Instead, our vote for the imperfect candidate is strategically used to limit evil—and that, in itself, is a morally sound choice.

1. Your vote keeps the worst person from being elected – and doing even more harm. This is a good moral choice.

3. You’re often voting for more than just the office for which a candidate is running.

For example, a state governor will appoint 300 judges, commissioners, and others to important positions. The candidate most aligned with your values will appoint more people who are acceptable. Other tightly contested races may have other important, though indirect, short- and long-term consequences.

So, you are faced with those two strategic choices as a Christian voter.

Voter guides are essential to helping you vote. Guides like iVoter.Com evaluate each candidate.

In our voter guide, we share a list of recommendations, posted at electionforum.org. Some races receive a “2 thumbs-up,” or “better than opponent.” Other races are graded more specifically, with a rating. The rating could be a 1-star or anything between 2 – 4 stars. The list includes Republican and Democratic candidates who are strategic in restraining evil.

In some races, a third-party candidate for a specific office is given two or three thumbs up – even though that candidate has no legitimate chance of winning the election. That rating is for those who wish to

follow the strategy of Christian voter #1. For those who decide to vote this way, you must remember that the lesser of two evils is still evil.

In cases where the third party gets a higher ranking, they won’t win.