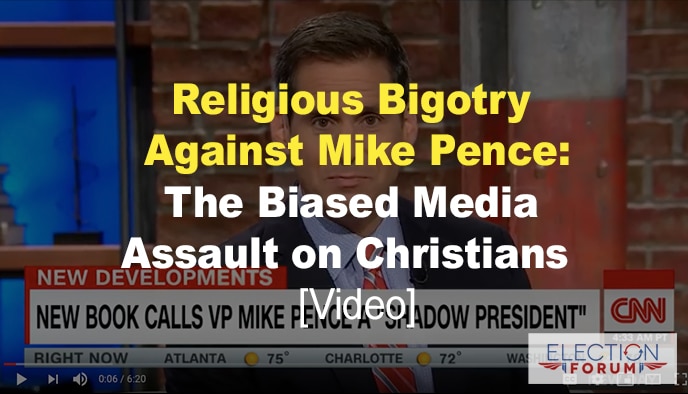 The ridiculing and demonizing of Christian faith in America by the media elite and by progressive politicians is becoming more and more acceptable … even though it’s blatant bigotry.

He was a fearless warrior for religious freedom and freedom of speech for all Americans during his tenure in the House of Representatives.

And now – from within the Trump administration – he continues to fight for religious freedom – and for an end to religious persecution – not only in the U.S., but around the world.

But you’d never know any of this from listening to the mainstream media … or from reading the recently published belittling book on Pence’s Christian faith, The Shadow President.

Pence’s commitment to religious freedom threatens the progressives, who want to turn the U.S. into a country where worship is allowed, but the practice of faith isn’t.

The authors of the book – along with the progressive media that’s praising it – are trying to scare readers into believing Mike Pence wants to turn the U.S. into as theocracy…

They want you to believe Pence wants to force his faith on the entire nation … and even on President Trump.

They want you to believe that all Christians are intolerant of any religious views – including views on marriage, abortion, gender identity, etc. – that disagree with their own.

But in fact, it’s the progressives who are guilty of bigotry…

To them, bigotry is perfectly acceptable when the target of the bigotry is a practicing Christian.