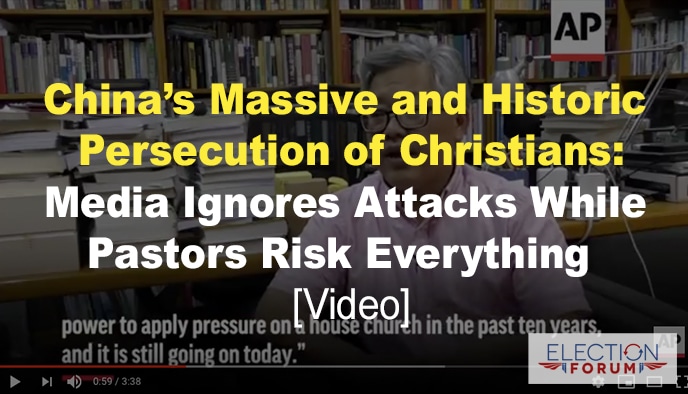 They are risking arrest, imprisonment, torture and execution at the hands of the communist government of China…

A group of 344 Chinese pastors – with the number growing daily – have signed a public joint statement titled “A Declaration of the Christian Faith.”

Meanwhile, government departments in charge of religion continue to clamp down on Christianity and other faiths as they enforce the “Regulations on Religious Affairs” that went into effect earlier this year.

The Regulations on Religious Affairs prohibit:

The Declaration of the Christian Faith boldly states:

“We are a group of Chinese Christians, chosen by the Most High God to be His humble servants, serving as pastors for Christian churches throughout various towns and cities…

“We believe and are obligated to teach the world that the one true and living Triune God is the Creator of the universe, of the world, and of all people. All men should worship God and not any man or thing.”

The joint statement makes 4 declarations to the government regarding the Christian churches in China:

The statement ends with the names of the pastors who have signed it … along with these words:

“We also will not accept any “ban” or “fine” imposed on our churches due to our faith. For the sake of the gospel, we are prepared to bear all losses – even the loss of our freedom and our lives.”

The persecution of Christians and other faiths by the Chinese government has the attention of the Trump administration and the U.S. government…

Please pray for the Chinese pastors who have literally put their lives at risk by standing up to the Communist Chinese Government and resisting the government’s takeover of all religious activity.

Pray for their safety and protection…

And pray for the U.S. government, that we will demand that the Chinese government grant religious freedom for all faiths within China, and end the religious persecution and repression.

Watch this video report of the persecution of Christians in China this year (3 ½ minutes): https://www.youtube.com/watch?v=bEvzssLw68o