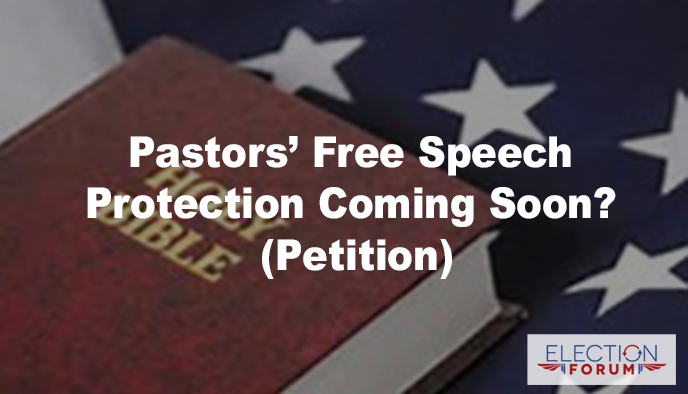 Pastors in America do not have full freedom of speech.

Pastors cannot say legally what they want … because of a little-known law called the Johnson Amendment.

The pastors censor themselves for fear of losing their tax-exemption status. But historically, the pastor has been the moral conscience of society—until that amendment was passed in 1954.

As a candidate, President Trump promised to ensure protections of pastors’ religious liberties and abolish the Johnson Amendment.

And now … it looks like that promise will be fulfilled very soon.

Pastors and preachers do not have the full freedom of speech that they deserve to exercise.

The Free Speech Fairness Act will repeal the Johnson Amendment, introduced into the U.S. tax code in 1954.

The Johnson Amendment revokes the tax-exemption status of any church or non-profit which engages in any activity that seems political to an IRS agent.

This is a monstrous intrusion into free speech, and patently unconstitutional

Pastors and Bible teachers have been at the forefront of political and social change in our country, from the American Revolution to the Civil Rights Movement.

It’s time to restore and the power and authority for all churches to speak out on moral and ethical issues without fear. After all, we in the Body of Christ are the Light of the World.

Unfortunately, liberal and anti-Christian opposition (from Democrats and Republicans) is growing.

We need your help to pass this important

Please fill out our petition, and tell Congress: