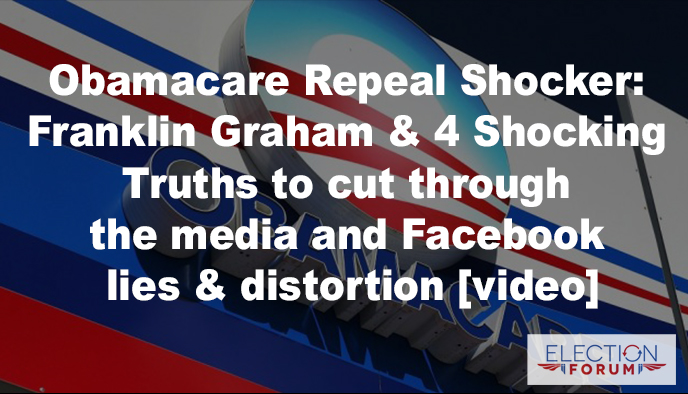 Here are 4 shocking truths about the stunning failure to Repeal and Replace Obamacare and next steps that should be taken to improve everyone’s healthcare.

Obamacare is hurting our healthcare in America and must be repealed. Sky rocketing premiums, unreasonable deductibles, shrinking choices, people losing their coverage, lost jobs and stagnant and deteriorating care run by bureaucrats is facing escalating crisis.

We must replace and repeal Obamacare now. But here is what the liberal media

Despite Obamacare being broken, the democrats are playing politics

This isn’t a republican or Democrat issue, it’s a health crisis that needs to change now.

A year ago, most of the moderate Republicans joined every conservative and libertarian Republican in Congress to vote for an Obamacare repeal and replace bill that was vetoed by President Obama.

But now, the moderate Republican pressured by Townhall opponents, petition and massive phone calls to their offices are pushing for Medicaid expansion and the costly Obamacare insurance regulations that are responsible for driving up premiums with outrageous deductions.

The bill must cut unnecessary regulations

The Ryan bill that was not voted on would not have increased competition and it would have kept the cost of health insurance premiums rising.

Only by adding these measures can the bill begin to roll back the costly premiums and co-pays that have been the hallmark of Obamacare. More Americans will have insurance because more will be able to afford insurance.

And here is Congressman Massie on why Obamacare lite is wrong. About 3 minutes. Click here. http://video.foxbusiness.com/v/5376290125001/?#sp=show-clips