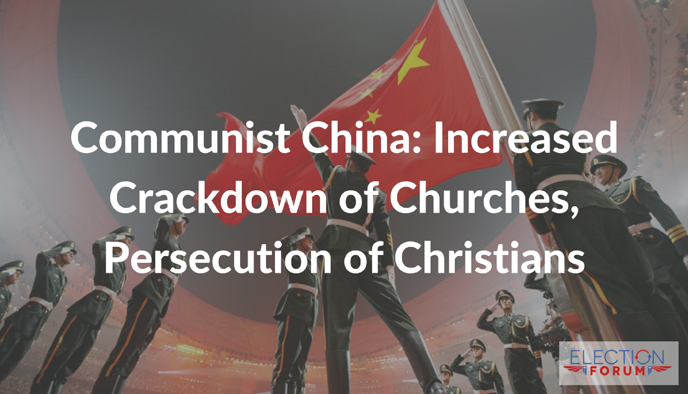 Persecution against Christians is growing worldwide.

Not just in the Middle East, but in China, where the Communist Party has persecuted Christians for over 75 years.

Christians must worship in secret. Churches are demolished. Pastors have been jailed, tortured, even murdered. In one case, a pastor and wife stood in front of a bulldozer to stop the destruction of their church. The pastor survived, but his wife was buried alive, then died.

Despite this destructive hypocrisy, the People’s Republic of China pays lip-service to religious liberty.

The nation’s constitution recognizes five major religions—Taoism, Buddhism, Islam, Catholicism, and Protestantism—yet all professions of faith are highly regulated by the state: Despite the nation’s over-regulation, more than twice that number of Christians worship in unregulated—read, illegal—house churches, which the Chinese government rigorously attacks and shuts down.

Today, 80 million Chinese are Christians, the same number who are members of the Chinese Communist Party.

But the current President of the Chinese Communist Party wants to change all of that.

President Xi Jinping is demanding more control over the expansion of religion in China. He wants to wipe out Christianity and replace the God of China with the state.

But critics of this religious persecution have countered that with more legislation to stop the spread of Christianity, Christians can fight back, asserting their rights to freedom of religion listed in the Chinese Constitution.

Please pray for our persecuted Christian brothers and sisters in China, and let us pray that our Loving Father will be able to protect them and foster the growth and expansion of His Church!

One Comment on “Communist China: Increased Crackdown of Churches, Persecution of Christians”