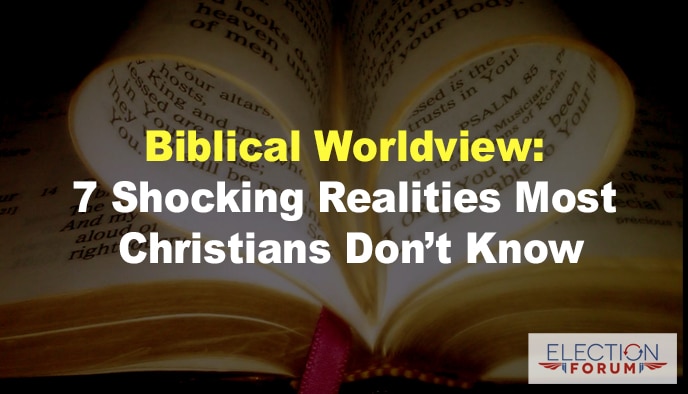 For many Christians shocking…

It’s how few who profess to be Christians believe in a biblical worldview.

First, everyone has a worldview – or a combination of worldviews – whether they realize it or not … even if they don’t know for sure what a worldview is.

Simply put, a worldview is the belief system through which we

It’s like a lens or a filter through which we view everything … and it helps us make sense of the world we see and experience.

Our worldview determines what we will consider to be

Since our worldview will determine what choices we make in life … and how we will behave in different situations and circumstances, the important questions are:

Your worldview is critical … as is living it out on a daily basis.

When I speak at groups or churches, I often describe what a biblical worldview consists of because it’s important … and because there’s such a huge disconnect.

The results were … well … disturbing…

While 46% of adults – roughly 112 million – claim to have a biblical worldview … Barna’s research found that only 10% — about 24 million – think and behave biblically.

Younger adults are much less likely to have a biblical worldview than older adults. Here’s the breakdown by age group:

Out of the half of the nation’s adults who consider themselves to be “pro-life advocates” – only 19% have a biblical worldview.

First, one may have a biblical worldview in some areas – say theology, philosophy, ethics and history – while having a conflicting secular humanistic worldview in biology, psychology, politics and economics.

Beliefs are important … but if they don’t lead to action, they aren’t true beliefs … as James makes clear in his discussion of faith and works in James 2:14-26.

Here’s a portion of the passage (NASB translation):

“What use is it, my brethren, if someone says he has faith but he has no works? Can that faith save him? If a brother or sister is without clothing and in need of daily food, and one of you says to them, ‘Go in peace, be warmed and be filled,’ and yet you do not give them what is necessary for their body, what use is that? Even so faith, if it has no works, is dead, being by itself.

But someone may well say, ‘You have faith and I have works; show me your faith without the works, and I will show you my faith by my works.’…Was not Abraham our father justified by works when he offered up Isaac his son on the altar? You see that faith was working with his works, and as a result of the works, faith was perfected; and the Scripture was fulfilled which says, ‘And Abraham believed God, and it was reckoned to him as righteousness,’ and he was called the friend of God.” (James 2:14-18, 21-23)