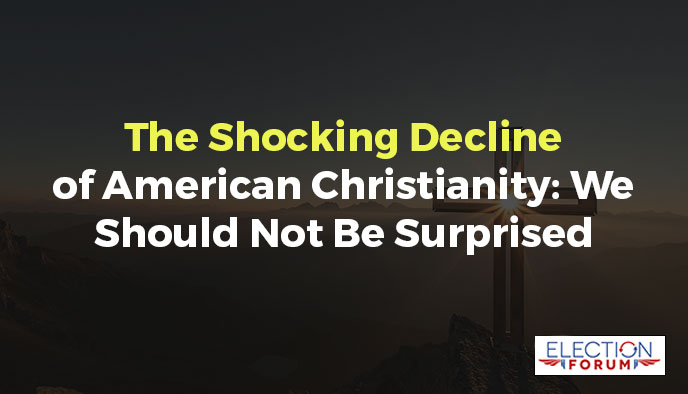 It was prophesied by Jesus in Matthew 24…

The prophecy? That there would be a great apostasy – a “falling away” from faith in Christ in the last days before His second coming.

We are seeing both prophecies being fulfilled…

Perhaps most disturbing of all is the increase in the religiously unaffiliated population – the so-called “Nones.”

To put these percentages in perspective, the number of religious “nones” has risen by about 30 million adults over the past 10 years.

In answering a question from His disciples about what would be the sign “of the end of the age,” Jesus said, “At that time many will fall away and will betray one another and hate one another. Many false prophets will arise and will mislead many. Because lawlessness is increased, most people’s love will grow cold.” (Matthew 24:10-12)

In the same passage, Jesus also said, “This gospel of the kingdom shall be preached in the whole world as a testimony to all the nations, and then the end will come. (Matthew 24:14)

“But the Spirit explicitly says that in later times some will fall away from the faith, paying attention to deceitful spirits and doctrines of demons, by means of the hypocrisy of liars seared in their own conscience as with a branding iron…”

One Comment on “The Shocking Decline of American Christianity: We Should Not Be Surprised”