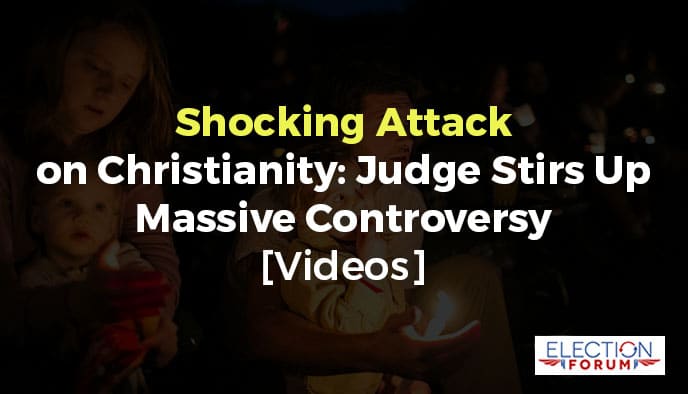 It was a shocking … stunning … amazing courtroom scene…

So much so that some even demanded that the judge resign.

Because she gave a Bible to a convicted murderer and read John 3:16 with her … in the courtroom!

Justice, mercy and love combined in a rare display of grace and compassion.

Others condemned their actions … and accused the judge of violating the separation of church and state.

The progressive media, the socialist politicians, and pressure groups called for the resignation of the judge.

The Freedom From Religion Foundation filed a formal complaint against the judge, claiming that “compassion crossed the line into coercion.”

All of this took place after the trial was over … and the defendant – a former Dallas police officer – had been convicted of murdering her neighbor … and had been sentenced to 10 years behind bars in Texas state prison.

We wrote about 18-year-old Brandt Jean’s act of forgiveness and compassion toward his brother’s murderer last week. Click here if you missed that article.

Jean spoke to the defendant from the witness stand and told her he wanted the best for her – because that’s what his brother would have wanted – and that what would be best for her would be for her to “give your life to Christ.”

Brandt Jean then asked the judge if he could hug the defendant. The judge – wiping away tears – gave him permission.

Judge Tammy Kemp stepped down from the bench and talked to the family members in the courtroom, hugging each of them as she consoled them.

She leaned over and told Ms. Guyger that Brandt Jean had forgiven her, and to “please forgive yourself.”

Guyger replied that she didn’t own a Bible and didn’t know “where to start.”

Judge Kemp then said, “I will get you a Bible.” That’s when the judge left the courtroom, went to her chambers and returned with her own personal Bible…

She opened it to John 3:16 and they read the verse together: “For God so loved the world that He gave His only begotten Son, that whoever believes in Him should not perish but have everlasting life.”

Judge Kemp gave Ms. Guyger the Bible to take to prison with her.

Guyger then asked the judge for a hug – not once, but twice…

So the judge’s hug was in response to a specific request by Amber Guyger.

Watch this video of a courtroom reporter describing the conversation between Judge Kemp and defendant Guyger after the conclusion of the trial and sentencing (3 minutes).

Watch this interview of the Dallas District Attorney who prosecuted the case, giving his opinions about law and forgiveness … and the presentation of a Bible to the defendant by the judge (12 ½ minutes).