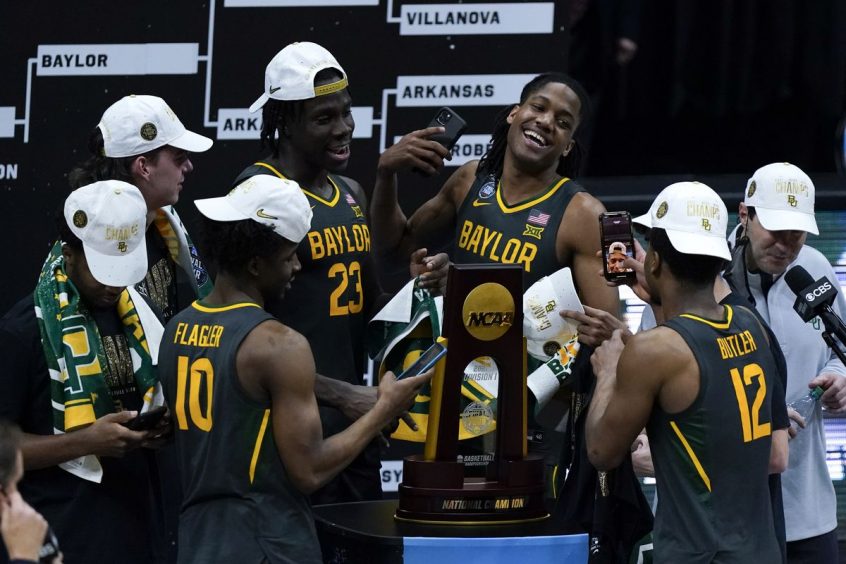 The Baylor men’s basketball team stood in a circle on the court and thanked God in prayer.

The media ignored them.

The Bears’ Jared Butler was named the most outstanding player of the Final Four tournament. Here’s what he said after the championship game:

“I’m not trying to preach a prosperity gospel, but our Lord and Savior, I say it all the time: He gets us through everything. Jesus Christ, man, He’s the truth. He was with us tonight, He was with us all season. He’s with us wherever we go. He just sustained us. He brought us together. He bought this team together – transfers, people from overseas. It’s just tremendous how it just comes and it comes all full circle.”

Baylor Head Coach Scott Drew took over a scandal-ridden basketball program in 2003 and gradually rebuilt it using a strategy he calls “JOY.” JOY stands for “Jesus, Others, Yourself.”

Drew said, “We’ve been a Christ-centered program since we’ve been here. Everybody comes in, spiritually, at different levels, but the great thing is that everybody’s open to growing. Each and every year, we want our players to grow academically and athletically, but also spiritually and in character.”

The team’s mission, according to Coach Drew, is to honor God and give Him all the glory in everything they do, regardless of their victories or defeats.

“I think the biggest thing is modeling after Jesus. He was a servant leader. And with us, hopefully, and prayerfully, it’s serving our players and helping them achieve their goals and dreams, not only on the court but in life and in the classroom.”

“If I didn’t have a relationship with Jesus Christ our Lord and Savior, I’d be a mess and the highs would be too high and the lows would be too low. I mean we’re all competitors. We want to win. But at the end of the day, I’m coaching for an audience of one.”

Click HERE to listen to Coach Scott Drew explain his philosophy of coaching and his ministry to his players (about 6 minutes).

4 Comments on “Playing for an Audience of One: Baylor Basketball Team Praises God after First-Ever NCAA Championship Victory [Video]”