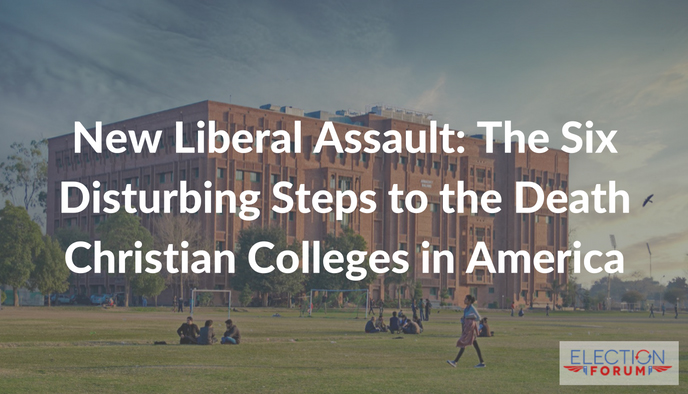 Under the radar of most Christians is the assault by the Left against Christian Colleges.

The Left not only wants everyone to accept LGBT moral standards, but force everyone who disagrees to accept them.

Currently, they are following a cunning, abusive process to destroy all Christian education, and they started their movement in California.

Here are the six steps that the Progressive Left is taking in their assault against Christian colleges:

Christian colleges must disclose their Title IX Exemptions. The US Department of Education now lists those colleges which claim the exemption, with the future intent of denying the exemptions. Without the exemptions, all Christian colleges would have to hire people to be professors, administrators, and other jobs who are homosexuals and transgendered individuals. In California, SB 1146 was finally passed out of the state legislature with the expressed goal of forcing colleges to report and publish extravagantly their Title IX exemption.

The colleges are being forced to disclose information regarding those who have filed complaints from students, employees, or staffs which allege discrimination based on their gender identity of sexual orientation. This will lead to expensive lawsuits and loss of student loans

As mentioned above, Christian colleges will be stripped of Title IX funding and grants. Students who receive scholarships would no longer be allowed to use their funding at a Christian college because of the school’s “culture of discrimination”.

Once the colleges lose the protections granted by Title IX exemptions, then the complaints and exposure will generate into expensive lawsuits against these colleges, on a massive scale. Can you imagine Christian colleges sued for discrimination, on the simply basis of enforcing their moral codes based on Biblical teaching? What’s worse, these colleges will likely lose the lawsuits. It will put them out of business.

One of the larger schemes of the liberal agenda has been to strip Christian colleges (and churches) of their tax exemption status.

Many Christian organizations rely on donations as well as their tax exemption status in order to function from year to year.

This measure would all but force smaller Christian colleges throughout the country to close down and larger schools to struggle to stay open.

Beyond drying up their funding, the Left has worked very hard to criminalize freedom of speech and religion for a long time. Anything that they can do to prevent the teaching and Christian principles, the sharing the Word of God, and the proclaiming the Gospel.

The final step of aggressive, well-funded organizations like the Human Rights Campaign will end with outlawing Christian colleges entirely.

Twenty, even ten years ago, no one would have thought that there would be such a subtle yet subversive onslaught against religious liberty.

Now we are witnessing the slow dismantling of the First Amendment, which will kill Christian colleges and freedom of religion in America.

4 Comments on “New Liberal Assault: The Six Disturbing Steps to the Death Christian Colleges in America”