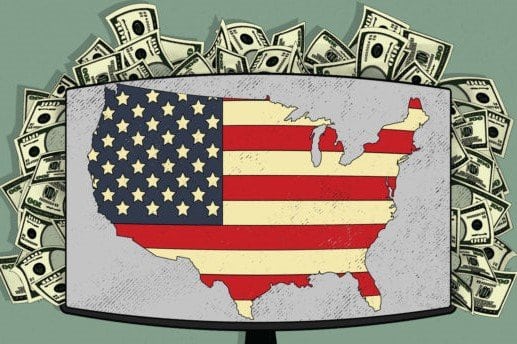 The stakes are high this year, especially for the midterms. Democrats are fighting desperately to hold on to their majorities in the House and Senate. This is causing campaign ad spending to skyrocket.

So far, campaign ad spending for the House, Senate, gubernatorial, and state midterms have exceeded over $2 billion.

By the time November rolls around, experts estimate that this midterm will be the most expensive midterm in history.

For comparison, the second highest midterm ad spend was in 2018, at just under $4 billion.

Forecasters expect Georgia’s Senate race between Senator Raphael Warnock (D) and ex-football star Herschel Walker (R), who was endorsed by Trump, will be the most expensive ad spending “war” between two candidates, at around $276 million.

Senate races in battlegrounds states like Arizona, Pennsylvania, and Nevada are also expected to top ad spending at over $200 million.

California, Illinois, Michigan, New York, and Nevada are all expected to spend over $100 million in House races.

Here are 4 unbelievable campaign ad statistics that will shock you:

The fight is intense for control of the U.S. Senate.

The Senate races are grabbing a large slice of the big money pie, roughly $878 million.

The remaining $13 million is from independent candidates.

The battle for the House control is also intense.

Campaign advertising spending in the battle ground states for senatorial candidates are really skyrocketing in Arizona, Georgia, and Pennsylvania.

In Arizona, Democrats are outspending Republicans, $72 million to $45 million.

The same is happening in Georgia, where Democrat spending is far ahead of Republicans at $92 million to $59 million.

But in Pennsylvania, Republicans are outspending Democrats $84 million to $59 million.

This ad spend is for TV, radio, and digital. It does not include the millions being spent on direct mail, geofencing, telephone and texting.

Note: Help us help transform America and stop the socialist, anti-family, anti-Christian candidates in the most competitive tight race in America.

The races that really will count and change the course of America.

We have vetted and carefully identified 14 must win races in swing states and House district races, that will stop the anti-family and deep state, socialist agenda that’s destroying the country.

The candidates we’ve identified in the U.S. Senate and House must win to control Congress, taking it back from the Democrat socialists. These are seats that will change America for better or worse, depending on who wins. They are candidates that will fight back against socialist control, and the reckless overspending that’s causing inflation.

Inflation, high gas prices, recession and reckless deficit spending all are on the ballot.

Help these 14 candidates fight for your religious rights, liberty, and economic security.

Click HERE to donate and help win back America.