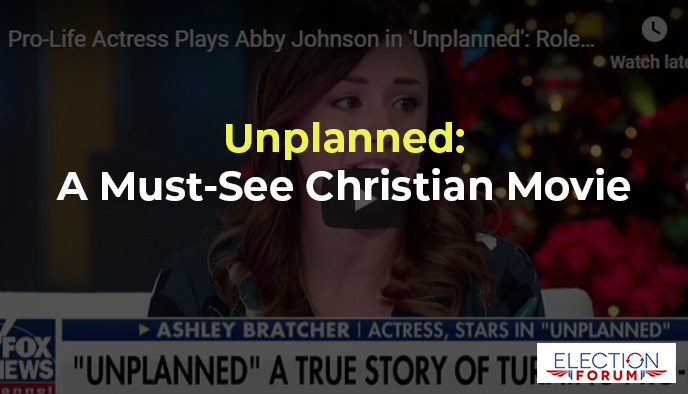 It’s about the unplanned creation of human life…

And it’s about the unplanned spiritual birth of a former abortion provider.

The new film Unplanned tells the dramatic true story of the epic journey of Abby Johnson, who was the director of a Planned Parenthood clinic in Texas for 8 years.

She resigned from Planned Parenthood and became a pro-life advocate after participating in an actual abortion procedure for the first time.

The film is based on the book by the same title, which focuses on the spiritual transformation that brings hope and compassion into the political controversy about how best to help women who face crisis pregnancies.

The movie will be released in theaters on March 29th. It’s a must-see film for every Christian and/or pro-life advocate.

Watch the trailer for Unplanned by clicking here (2 ½ minutes).

Watch Tucker Carlson interviewing Abby Johnson, the former abortion clinic manager whose story is the subject of the movie (a little over 6 ½ minutes).

And watch this emotional interview with Ashley Bratcher, the actress who plays Abby Johnson in the movie. She reveals an incredible secret about herself she wasn’t even aware of when she agreed to do the film (5 minutes).