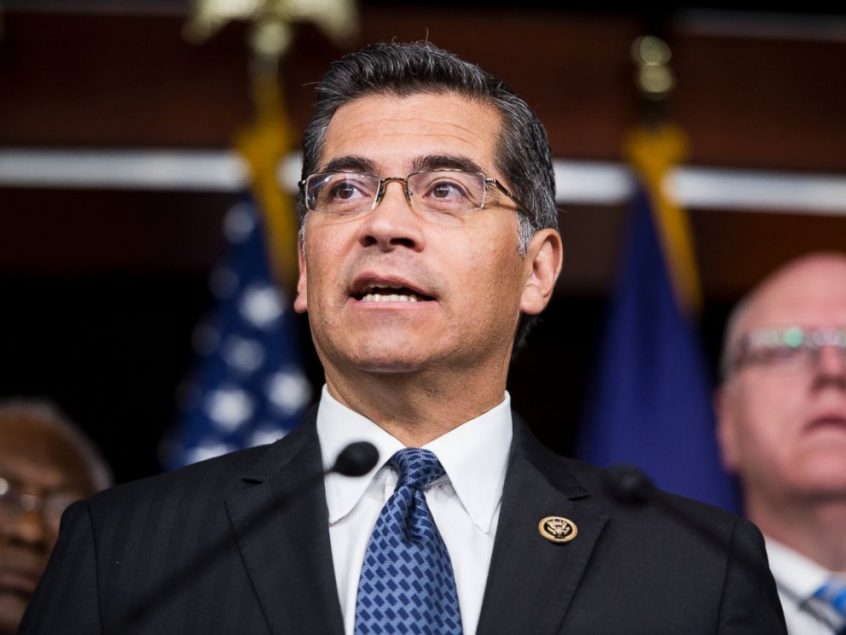 President Biden has nominated a radical to be Secretary of Health and Human Services (HHS).

The pro-abortion, anti-religious extremist Xavier Becerra will, if approved, have a devastating long-term impact on America.

Here are the 15 reasons why Becerra should not be confirmed… and will be a danger to the future if he is:

#1. Xavier Becerra has a history of supporting abortion on demand.

He will instill policies throughout federal, state and local government – and to the extent he can, on hospitals and the private sector – to promote abortion on steroids.

Americans who support legal abortion often do so with important qualifications that put limits on abortion.

He favors abortion on demand without any reason, or gestation time limit, or how old the baby is.

This extreme position is out of the mainstream of American thought, and completely reverses the direction of the previous administration, which promoted life.

That is why Becerra had received a 100% NARL and Planned Parenthood rating, and a 0% score from the National Right to Life and the Pro-Life Council.

#2. He’s an advocate of partial-birth abortion.

Probably the most gruesome abortion practice is partial-birth abortion.

This abortion is so hideous that most states have prohibited it.

Becerra wants to overthrow the ability of the states to restrict abortion and to prohibit partial birth abortion.

What is partial-birth abortion?

It is seen in this graphic:

This is where the baby is partially taken out of the womb and the brain is sucked out. If they did not suck out the brain, it would be murder but because they killed the baby in the womb, it is considered to be okay.

#3. Becerra is against religious freedom.

The Department of Health and Human Services has protected Catholic, evangelical Christians and other people of faith from being forced to do something against their conscience.

But Becerra does not believe that. In fact, what he did as California Attorney General was to use California taxpayers’ money to fight Hobby Lobby.

That’s right. Hobby Lobby had sued Obamacare because it was forcing the owners of the company to violate their sincerely held religious beliefs by requiring them to pay for birth control in their healthcare plan.

He believes there is a difference between freedom of religion and freedom of worship.

Freedom of religion means you can practice your faith without hindrance and tell others about it.

Freedom of worship means you can worship God any way you want, but you cannot act upon your faith or tell others about it.

A battle that has taken place – Becerra has been at the forefront of trying to get Catholic and evangelical adoption agencies not to live according to their faith, but  be forced to follow what is politically correct.

Catholic agencies and evangelically-run adoption agencies believe that people of the same sex would not be the best model as adopted parents. They have practiced saying no to same-sex couples from adopting kids.

In a free society that honors freedom of religion, this is acceptable.

In a socialist society where government can control what you think and believe, it forces Catholics and evangelicals to accept what the bureaucrats and politicians say is what Becerra believes.

#5: Becerra has made a personal vendetta against pregnancy centers.

Pregnancy centers are usually run by churches, non-profit groups and sometimes individuals to help counsel girls on abortion…and give them the alternative of adoption.

Becerra sought as Attorney General to close down pregnancy centers but was stopped by the U.S. Supreme Court.

In 2018, in National Institute of Family and Life Advocates v. Becerra, the Supreme Court ruled against his unjust mandate that forced the counseling centers to post a message saying that the state would pay for a woman’s abortion.

Obviously, that violated the purpose of the pregnancy centers and it constituted what the court called “compelled speech.” Therefore, it was unconstitutional under the first Amendment, even in a court dominated by judicial activists.

#6: Criminalization of a third party killing a baby in a womb.

Under law if a baby in a womb is killed by a car accident or some type of physical force against a woman, that is committing a crime.

But according to Becerra, the unborn child has no rights and thus it is not a crime.

#7: Using the power of government to persecute opposition, Becerra has no respect for individual rights.

In fact, he has used the power of government to go after his opponents.

In fact, he was very upset with David Daleiden and Sandra Merritt for producing an undercover film of Planned Parenthood officials selling aborted baby parts.

Instead of investigating this illegal activity, Becerra brought felony charges against the filmmakers.

Even the pro-abortion, pro-sSocialist Los Angeles Times criticized him for his “disturbing overreach.”

The court case is still being heard after millions of dollars being sucked out with the threat of jail time for the filmmakers.

#8: As Attorney General, attacking Little Sisters of the Poor nuns.

Becerra also has attacked the Little Sisters of the Poor.

Because they had objected to being forced to pay for abortion-inducing drugs, contraception and sterilization in their healthcare plan.

They had to go all the way to the Supreme Court.

But Becerra tried to fight them by filing lawsuits against the Trump administration that would protect the nuns from an HHS mandate that was passed under the Obama administration.

One famous case is the baker in Colorado who was forced to go all the way to the Supreme Court.

Because he will sell wedding cakes and other bakery items to anyone, no matter what their sex, sexual preference or religious beliefs.

He told them they could go down the street or they could just buy the cake, but he couldn’t in good conscience decorate it on religious grounds that would confirm an unbiblical marriage.

#10: Becerra did not care about their beliefs. He cared about using the power of government to force the baker to do something against his own religious beliefs.

Again, Becerra lost to the Supreme Court on this issue.

#11: Becerra believes that churches, Christian-based organizations, and religious non-profits do not have religious protection.

#12: Becerra is a strong promoter of the Equality Act.

He was a co-sponsor of it when he was a Congressman.

The Equality Act denies biological truth and requires a child to choose which sex he is for sports, allowing men and boys sports teams to shower with the girls.

It would force churches, Christian-based hospitals and organizations, and businesses to violate their conscience.

Becerra has favored church closures and opposed the opening of the churches.

Even though the U.S. Supreme Court said that churches can be open, Becerra opposes those ideas.

#14: He will promote the growth of the Deep State.

Becerra will put into place within the bureaucracy of the department, ideologically driven, pro-abortion, anti-religious fanatics who for the next four years, will be at war against people of faith.

But not only that, they will have jobs that most of them will be able to stay on even if a less radial administration wins four years from now.

We need to create thousands of phone calls opposing this nomination.

Some Democrats, who recognize how radical he is, could vote “no.”

And those who are pro-abortion and anti-freedom advocates have organized and targeted some Republicans to have them go along with the nomination.

It is critical that you act now.

Let me know what you think. Write me at craig@electionforum.org.

2 Comments on “The Most Radical Biden Appointment Yet? Xavier Becerra as Secretary of Health and Human Services is an Assault on Religious Liberty, Religious Freedom, and the First Amendment – 15 Things You Should Know”