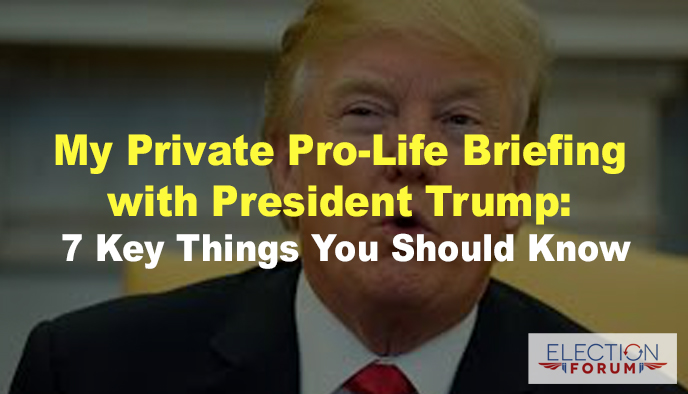 Shelly and I were invited recently to participate in a conference call with President Trump.

He invited a select group of pro-life leaders to join in. This is what he said:

1.He is grateful to those wanting to act to save the unborn.

“Thank you very much and I want to thank all of the thousands of pro-lifers and pro-life leaders, pastors, families and advocates for joining this call and for working with such love and devotion to build a culture that cherishes human life.”

2. He is shocked by recent pro-abortion legislation.

“In recent weeks, events have taken place that have shocked the conscience of our whole nation, and this is whether you’re pro-life or anything else you happen to be, because what’s happened is terrible. Democratic lawmakers in multiple states have been working to expand extreme late-term abortion. In New York State, legislators cheered with delight for a law that will allow babies to be ripped from the womb of their mother (sic) in the ninth month, right up until the moment of birth. Then to take it even a step further, in an incredible event and a horrible event, the Governor of Virginia even stated that he would allow a newborn baby … a baby that was actually outside and as he said, “Wrap the baby, warm the baby,” and then he [the doctor] has a discussion with the mother and the father as to what to do with the baby, and we use (sic) the word, in the State of the Union, “executed” the baby. That is exactly what it was. It was an execution.”

3. America must protect the unborn.

“America must always be a nation that protects the most vulnerable, and that defends the very first right in the Declaration of Independence, called the “Right to Life.”

4. President Trump says he is working to protect the unborn.

“Since day one, I have kept my promise to protect unborn children. During my first week in office, I reinstated the Mexico City Policy, so the Mexico City Policy has been reinstated, which as you know other presidents … many presidents were not willing to do, but I did it. Last month I signed a letter to Congress to make clear that if they send any legislation to my desk that weakens the protection of human life, I will issue a veto.”

5. He has protected religious liberty and conscience.

6. He wants to ban partial-birth abortion.

“During my State of the Union address, I asked Congress to pass legislation to prohibit late-term abortion of children who can feel the pain in the mother’s womb.”

7. President Trump had with him survivors of abortion.

“A few moments ago, I spoke with several families … beautiful stories serve as an inspiration to all of us. They’re actually in my office right now. One of the people who joins us in the Oval Office today is Micah, in name Micah Pickering right in front of me. Beautiful young man. Micah was born at 22 weeks. Today is a healthy … I can tell you that, I’m looking at him … a healthy six-year-old boy filled with energy and filled with life and he’s doing very well…

“We’re also proud to be joined today by Katy Shaw. Katy was born with Down Syndrome and she said, “I’ve made the world a better place.” Katy has actually made the world … she’s right in front of me. She looks fantastic…”

As the president concluded he said, “Every child born and unborn is made in the holy image of God. Together, we will continue to work for the day when all children have a chance to live and to love and to dream and to reach their full God-given potential.”

What do you think about this unprecedented conference call? Email me at craig@electionforum.org

7 Comments on “My Private Pro-Life Briefing with President Trump: 7 Key Things You Should Know”