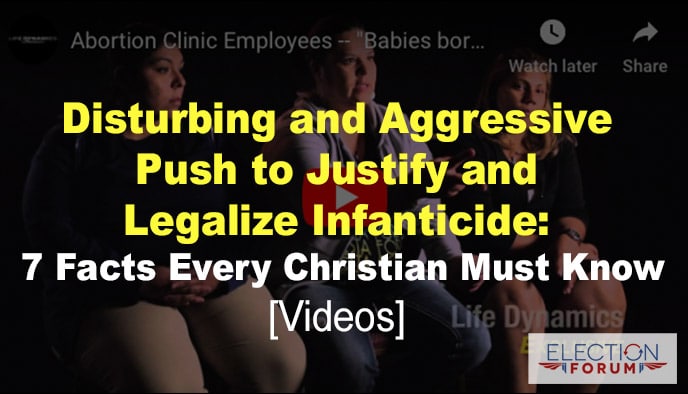 Able to live outside the womb … but killed instead.

Sadly, the battle is splitting the country apart as the Democrat Socialists are aggressively justifying making infanticide legal in all 50 states.

The politicians and media are ignoring and destroying the truth.

Here are 7 facts about partial-birth abortion every Christian should know:

1.What partial-birth abortion really is.

The abortionist then punctures the base of the baby’s skull with a surgical instrument, such as a long surgical scissors or a pointed hollow metal tube called a trochar.  He then inserts a catheter into the wound and removes the baby’s brain with a powerful suction machine. This causes the skull to collapse, after which the abortionist completes the delivery of the now-dead baby.

It’s been outlawed in most states because it’s so gruesome.

Democrats, Independents and Republicans all have been opposed to partial-birth abortion.

When I speak at groups and churches, I often use this graphic:

The doctor – or midwife or nurse practitioner – can take the baby partially out of the womb. Because the baby’s head is still inside the birth canal when his or her brain is sucked out of the head, it’s not legally considered murder or infanticide.

Former abortion clinic workers have testified that they’ve seen babies’ toes spread open when the abortionist was puncturing their skull. They feel pain while they are being killed … but they are unable to scream because they haven’t yet been exposed to the outside air, nor have started to breathe on their own.

This is why so many states don’t allow partial-birth abortion.

2. Killing the born-alive baby – “The infant would be kept comfortable.”

Occasionally a baby is born alive that was intended to be aborted in the womb.

But that doesn’t always happen. Often they are killed … or put in a closet and allowed to die on their own from starvation or neglect.

They are treated as an inconvenience to be gotten rid of.

Barack Obama, as a state senator, voted against a bill seeking to require abortionists to take life-saving measures to save the lives of babies who were born alive after a botched abortion attempt.

Many socialists and pro-abortion groups – such as Planned Parenthood – want to allow the killing of babies after birth if the parents don’t want to keep their child.

A discussion about whether to keep the baby alive … or kill it.

Senator Ben Sasse was horrified. He responded, “This is morally repugnant…In just a few years pro-abortion zealots went from ‘safe, legal, and rare’ to ‘keep the newborns comfortable while the doctor debates infanticide.’ I don’t care what party you’re from – if you can’t say that it’s wrong to leave babies to die after birth, get the hell out of public office.”

We should all agree that the killing of a baby born alive, whether by withholding lifesaving care, or by any other means – intentional or not – is repugnant.

In 2002, President George Bush signed the Born-Alive Infants Protection Act, which recognized and defined any child surviving a botched abortion as a full person under federal law.

While this is a good start, federal law still lacks an enforcement mechanism to hold abortionists accountable for killing, harvesting organs, or denying medical care to infants born alive.

The good news is Nebraska Senator Ben Sasse’s (R) Born-Alive Abortion Survivors Protection Act does exactly that. This is something Congress should surely have bipartisan support passing.

3. Why the socialist/democrat politicians are pushing this now.

The Democrat/socialist politicians are pushing unlimited abortion now because they fear the new U.S. Supreme Court will reverse the flawed and wrongfully-decided Roe v. Wade abortion decision that forced legalized abortion on all 50 states by judicial activists.

That’s why New York, Delaware, Virginia and many other states are pushing new abortion legislation…

New York Governor Andrew Cuomo had the One World Trade Center spire lit up in pink to celebrate the state legislature passing its dubiously-named Reproductive Health Act … which now allows for legal abortion up until birth – as well as removing abortion from the criminal code.

Cuomo declared it to be a “historic victory for New Yorkers and our progressive values.” New York now joins seven other states that have no gestational limits on abortion.

But the politicians, media, and Planned Parenthood are lying to America. They are intentionally distorting and misrepresenting what reversing Roe would mean…

The truth is … overturning Roe would allow each state to decide on abortion: to either give 100% protection to the babies, or allow abortion, setting whatever limits each state wants.

4. Applauding evil – the media and politicians.

The politicians are excited, but Americans are waking up and realizing that:

Vice President Mike Pence blasts the left’s embrace of infanticide as “morally reprehensible and evil.” Here are a few of his comments:

“This shameless embrace of a culture of death is startling of every American who cherishes life. Not long ago, the Democratic Party’s stated position was that abortion should be ‘safe, legal, and rare.’ It was this widespread rejection of late-term abortion that led a large bipartisan majority in Congress to pass the partial-birth-abortion ban in 2003. But now look at how far the Democratic Party has fallen.

“As modern science has moved the point of viability even earlier in pregnancy, most Americans have agreed that a child who can survive outside the womb deserves a chance at life.”

All this started as our society turned from a predominately Christian worldview to a secular worldview – a worldview in which:

Bethany Mandel notes in The Washington Post: “There are more abortions after 20 weeks than gun homicides in the United States, and according to research from the Planned Parenthood-affiliated Guttmacher Institute, ‘data suggest that most women seeking later terminations are not doing so for reasons of fetal anomaly or life endangerment.’”

Make sure your church is helping encourage women in crisis pregnancies to carry their babies to term and give them up for adoption.

Encourage your pastor to tell the whole truth about abortion.

Make sure your church has a support system in place.

Every church should have a night of prayer and repentance – with abortion being a part of the focus.

I praise God for adoption.

I wouldn’t be here if today’s laws were in effect when my birth mom was pregnant with me.

I was adopted and God gave me great parents.

Millions are being spent. Massive organized groups of volunteers are being formed to get out the vote in 2020 to elect state, congressional, and presidential pro-abortion candidates.

You can be part of the solution:

Be the solution to protect the unborn – and the born.

To help me educate, motivate and mobilize voters who share your values, you can donate here.

Watch this 5 ½-minute video of a former abortion doctor testifying about the brutality of 2nd– and 3rd-trimester abortions. Share this video with others.

Watch this video of Tony Perkins – President of Family Research Council – discussing how the push to ease restrictions on late-term abortions is taking over the Democratic Party (about 3 minutes).

Watch this 14-minute video about the murder of living babies in abortion clinics in the U.S.
CAUTION: While not graphically disturbing, the words and testimonies on this video are disturbing.

3 Comments on “Disturbing and Aggressive Push to Justify and Legalize Infanticide: 7 Facts Every Christian Must Know [Videos]”