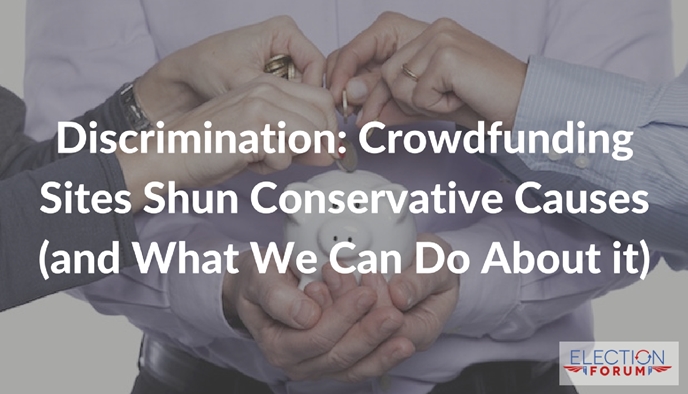 These are well-known and growing crowdfunding sites.

Want to raise money to make a movie?

To raise funds for a charity?

Or are you trying to get a gift for someone?

These crowd-funding forums allow you to do so.

But now they are discriminating against Christians and conservative causes.

Kickstarter rejected a crowd-funding movement for Phelim Mcaleer’s movie Gosnell, which documented the horrific murders of new-born babies in a downtown Philadelphia abortion clinic, and the media silence which refused to cover it.

Maybe it should called “No Fund Me”? (Credit: Go Fund Me)

GoFundMe also rejected the fundraising program for this movie.

Why? This and other online programs have enacted a policy to shut down fundraising if there are “claims of discriminatory acts.”

These websites have also denied fundraising for:

But there is hope.

Arthur Goldberg of Jewish Institute for Global Awareness, has set up a new crowd-funding site called Funding Morality—www.fundingmorality.com—which will support fundraising efforts for all concerns, including pro-life and pro-family causes.

She’s a mother, 40 years old, with a long life ahead of her.

She suffers from a rare but debilitating auto-immune disease, scleroderma. Her internal organs are hardening! She can’t eat normally. Her body aches inside and outside.

At one point, her insurance company refused to pay for the long-term treatment, since Stephanie comes from California, and assisted suicide is now legal. But she is a devout Catholic, and she emphatically rejects suicide.

The insurance company later reversed its decision, but costs are piling up.

She needs all the respect we can offer.

If you want to donate to her campaign, click here.

One Comment on “Discrimination: Crowdfunding Sites Shun Conservative Causes (and What We Can Do About it)”