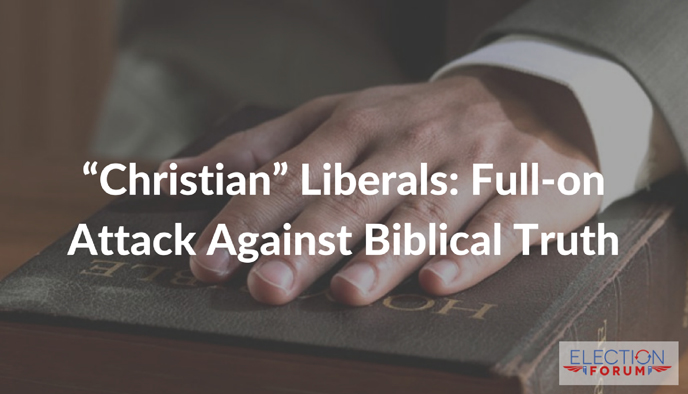 With the election of Donald Trump, liberal Christians have seen their policies set back for years.

So now, a full-on assault on Christian values and Biblical truth is escalating.

Academics, men who profess themselves wise, are actually fools about God, His Word, and the Truth.

Now they are attacking Evangelical Christians, claiming that they are backward, bigoted, and even dangerous!

Catherine Wallace, a literary theologian at Northwestern University in Illinois, has argued that Christian “fundamentalism” poses a greater threat than radical Islamic terrorism.

In her view, Christians who get access to the United States’ military and the nuclear codes would cause irreparable, global harm all over the country.

Wallace then argued that “The religious right in its most contemporary form has an origin in Southern opposition to desegregation and to the Civil Rights Movement.”

That is a lie!

Christians in the Southern Baptist Christian League (which to this day embrace wholesome values based on God’s Word and Biblical truth) fought against the unjust Jim Crow laws throughout the South.

Christians of all ethnic backgrounds came down to the South to help fight segregation.

Like many secular thinkers with no respect for truth and error, Wallace debunks the Bible as not literally God’s Word. In her view, if Christians just see the Bible as a collection of Jewish fables and stories, then they would no longer appear bigoted or racist.

But what did the Apostle Peter tell his fellow Christians before his death?

“For we have not followed cunningly devised fables, when we made known unto you the power and coming of our Lord Jesus Christ, but were eyewitnesses of his majesty.” (2 Peter 1:16)

As Christians, we should rejoice that Donald Trump won the Presidential election, and we dodged a bullet from the anti-religious tyranny of a potential Clinton Administration.

But the forces of evil who resist God’s Word, who reject Jesus and His grace, are still fighting and raging:

“Be sober, be vigilant; because your adversary the devil, as a roaring lion, walketh about, seeking whom he may devour: Whom resist stedfast in the faith, knowing that the same afflictions are accomplished in your brethren that are in the world.” (1 Peter 5: 8-9)