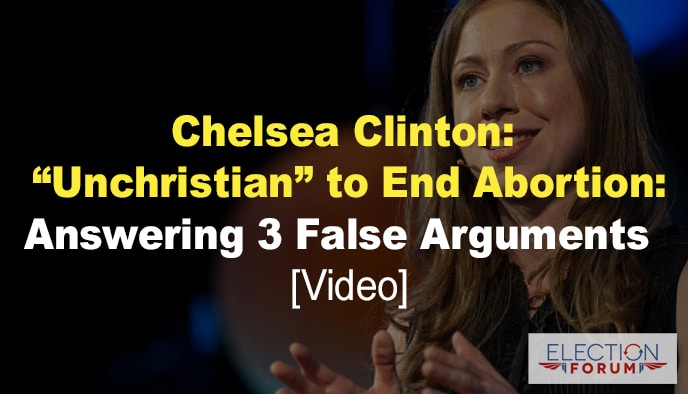 Chelsea Clinton says it would be “unconscionable” for the U.S. to make abortion illegal again – as it was before Roe v. Wade.

She also said regarding reversing Roe, “…as a deeply religious person, it’s also unchristian to me.”

She gave 2 reasons for wanting to protect abortion rights:

Regarding her 1st argument, Ms. Clinton said, “When I think about all of the statistics that are painful of what women are confronting today in our country, and what even more women confronted pre-Roe and how many women died and how many more women were maimed because of unsafe abortion practices, we just can’t go back to that.”

Regarding her 2nd argument, Clinton claimed, “American women entering the labor force from 1970 to 2009 added three and a half trillion dollars to our economy, right? The net, new entrance of women – that is not disconnected from the fact that Roe became the law of the land in January of 1973.”

Let’s examine these claims and answer them rather than ignoring them.

Because C.S. Lewis wrote in The Weight of Glory, “Good philosophy must exist, if for no other reason, because bad philosophy needs to be answered.”

Chelsea Clinton gives a moral reason and an economic reason for preserving Roe:

Clinton believes we should keep abortion legal to keep the procedure safe.

She doesn’t address the underlying moral question of whether an unborn child is – in fact – a living child.

It’s now irrefutable – based on scientific advances since the Roe v. Wade decision in 1973 – that human life begins at conception.

If you haven’t seen it yet, watch this 36-second video of the bursts of light scientists have discovered are given off in the womb at the moment of conception.

It can only develop into a human being. Nothing is added during pregnancy other than the growth and development of what has existed since the moment of conception.

Therefore, unborn children have the same “inalienable” right to life as do children outside their mothers’ wombs.

Legalizing an immoral act – the murder of a living, unborn child – to make the procedure for committing the immoral act safer does not transform it into a moral act.

This argument relies on the assumption that only after the Roe decision could women abort their babies and enter the workforce.

According to the primary source for research and policy analysis on abortion in the U.S., abortion was common in the pre-Roe era.

Women were already aborting their babies and entering the workforce before the Roe decision became law in 1973.

And what about the negative economic impact of the 60 million lives lost due to abortion?

It’s been estimated that abortion has reduced America’s GDP by $45 trillion in lost labor since 1973 … and that the cost climbs by another $2.5 trillion every year.

Every abortion in the U.S. costs the country a potential worker and taxpayer … not to mention the lost potential offspring of those aborted.

Christians support adoption … and oppose abortion … because of their Biblical worldview.

Based on their understanding of the Old Testament scriptures, Christians during the Roman empire rescued, nurtured and adopted unwanted babies that had been tossed on the side of roads or cast underneath bridges.

And it was Christians who founded most hospitals, orphanages and schools.

Greg Laurie – at the recent Harvest Crusade – shared the powerful story of his own mother, who could have aborted him … but God’s hand was on his life even before he was born.

But today he’s alive … he’s a Christian … and he’s running for Governor as a pro-life candidate in the state of California.

When I speak, I often talk about how I praise God that abortion laws were different when I was born than they are today.

Because I was adopted.

I thank God for my adoptive parents … and I thank God that my mother gave me up for adoption rather than aborting me.

I know God’s hand was also on my life from the moment I was conceived.

More than half of Christian women know someone who has had an abortion … but as Christians, we understand that God is a God of mercy, forgiveness and second chances.

We need to promote adoption and stop the murder of the unborn.